Back in September, we ran something about Jamie Foxx confirming that the Sinister Six were in the works for the Amazing Spider-Man franchise. The tidbit was taken from an interview on a press junket for White House Down and Foxx’s costar from that movie, Channing Tatum was sitting right next to him. Tatum took the opportunity to add his two cents as to what Marvel character he’d like to work on. 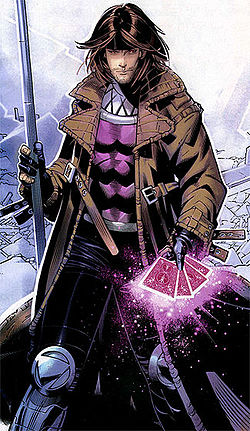 For those of you who can’t or won’t play that clip, here is what he said:

“No knock on Taylor Kitsch, though, ’cause I actually like his Gambit, but I’ve always lived around Cajun people. Gambit was always like the woman-loving, cigarette-smoking, drinking guy. He was the punk rock of all the superheroes. He’s a thief. He kind of rode the line.”

In that above article, I stated that Tatum staking claim to that character would cause Fox to get in touch with his agents. I don’t know if that happened, but an X-Men producer has stated she want to work out a deal with the actor.

As part of the big publicity push Empire Magazine is doing for X-Men: Days of Future Past, producer Lauren Shuler Donner spoke with the publication and gushed over the prospect of putting Tatum in the brown trenchcoat:

I’m dying to do a Gambit movie with Channing Tatum. That doesn’t have to be a great big movie. It’s a thief in New Orleans, it’s a whole different story. He’s on board, and I have to get the studio on board. How can anyone resist Channing? He’s such a sweetheart.

If you can allow me a moment of my usual snark, I find it funny that she makes a point that a Gambit film “doesn’t have to be a great big movie,” when The Wolverine, which she also produced, was fairly awesome smaller film for its first two-thirds before becoming a big, sloppy action film in its final third.

Keeping the film smaller might be an excellent way to get the studio on board. Tatum was a hot property after a stellar 2012, but with a disappointing White House Down last year, the romance might be off between him and Hollywood studio executives.

Another potential stumbling block that has been mention is the fact that Taylor Kitsch has already played the role in X-Men Origins: Wolverine, obviously with an eye for a potential spin-off. But that doesn’t seem to be that big of a stumbling block, as numerous characters such as Emma Frost and William Stryker have been repurposed for films that have come after it.

The critical and box office success of Fox’s two R-rated comic book adaptations is opening up opportunities for the film. [click for more]

SPOILER: A Description Of THE WOLVERINE Post-Credit Scene

We might see the Fox Marvel characters in the Marvel Cinematic Universe as early as 2019. [click for more]

Cant make em any worse so why not?

Please, no! Taylor Kitsch was a great Gambit, but if it’s unlikely he’ll reprise his role, I feel there are better choices than Channing Tatum.