Bob Harris (Bill Murray) is a stranger in a strange land. A movie actor whose career has seen better days, he finds himself in Tokyo working as a pitchman for a Japanese brand of whiskey. Even though the neon of Tokyo is as bright as that of New York City or Los Angeles, the unfamiliar kanji characters underneath something as familiar as the McDonalds golden arches only emphasize his feelings of loneliness and alienation. Things seem to look up one night in his hotel lounge when he meets Charlotte (Scarlett Johansson), the young wife of a rock photographer (Giovanni Ribisi) who is constantly working, leaving her behind to brood in her hotel room. The two spend an night on the town that draws them to each other, hanging onto each other for a bit of familiarity in an unfamiliar landscape.

Screenwriter and director Sophia Coppola drew upon her own experiences as a photographer in Japan in the mid-1990s as inspiration for this film. Any Japanese that is spoken in the film is left unsubtitled, giving the audience a taste of the isolation Bob and Charlotte are feeling. This point is further driven home with Bob’s appearance on an outrageous talk show (Think early David Letterman on speed after his set has been redecorated by an exploding paint truck.), which leaves him looking more confused than bemused.

The influence of Coppola’s famous father is also evident in the film, though not through his own films. Lost In Translation has an almost dreamlike quality reminiscent of New Wave Italian films like La Dolce Vita (Which is on a hotel television at one point in the film), which the elder Coppola has stated have had a profound influence on him. 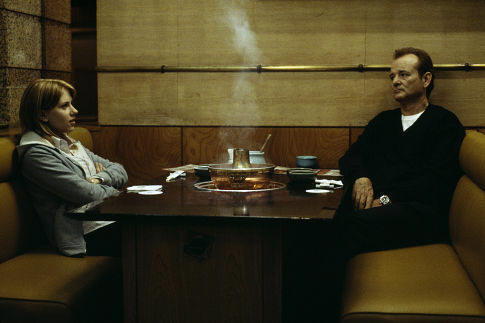 Bill Murray is a revelation here, delivering a dramatic turn that is fantastic to watch. Very early in his career, Murray starred in a remake of The Razor’s Edge, a dramatic picture about a soldier returning home from war. Unfortunately, at the time he just didn’t have strong enough acting chops to pull off the role convincingly and audiences were not ready for a Bill Murray performance that veered so far from his work in popular comedies like Meatballs. In more recent years, Murray has been inching towards roles that mixed comedy with more of a dramatic component, culminating in the performance he delivers here. True, there are some signs of the old quipster Murray it’s just a layer of his character’s personality, a shield he uses to mask his loneliness.

Johansson holds her own against Murray, adding subtle layers to her young woman who is trying to come to grips with her attraction to a man some 30 years her senior. Johansson conveys a confused attraction to Murray that helps to create a subtle layer of sexual tension much different from a more straight forwardly romantic Hollywood film.

Indeed, Lost In Translation is not a romantic film, though you get the feeling that if the two leads were slightly different people, they would have wound up in bed together. Instead, it’s a film that examines need for friendship and the intimacy that can develop between to people who desperately need another person in their life.

1. Star Wars: The Clone Wars (3,452 Theaters, 98 Minutes, Rated PG): As a Star Wars fan, I am of two minds over this movie. Part of me is excited that the Star Wars mythos [click for more]

The screenwriter of the disastrous OLAF’S FROZEN ADVENTURE has been chosen to write the long-awaited BLACK WIDOW film. [click for more]