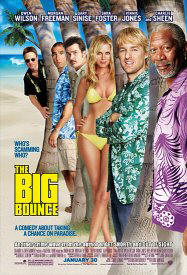 When comes the day that someone writes the book When Bad Movies Happen To Good Actors, there will undoubtedly be a chapter devoted to the latest film adaptation of an Elmore Leonard novel, The Big Bounce, a film that lands with nothing more than a dull plop.

Owen Wilson is Jack Ryan, a small time crook who works odd jobs in between scamming tourists on one of the smaller Hawaiian islands. Although he is looking to go straight, he can’t resist showing off his criminal talents to the beautiful Nancy (newcomer Sara Foster) when she reveals she’s attracted to bad boys. Nancy approaches Jack with a plan to rip off her boyfriend, real estate magnate Ray Ritchie (Gary Sinese), a business rival of Jack’s boss Walter (Morgan Freeman). Jack soon finds himself trying to figure out who is manipulating whom in a web of double-crosses.

In the 1970s, Morgan Freeman stressed the importance of learning to read to millions of kids as Easy Reader on the PBS educational series The Electric Company. It’s a shame then that he didn’t seem to read the script to The Big Bounce more carefully before signing on. The movie is nothing more than a series of scenes that vaguely advance the plot loosely connected by non-sequetor shots of Hawaiian scenery and surfers. The film meanders along until it reaches its conclusion. The term climax here would be inappropriate as it implies that the film actually elevated itself in terms of tension or excitement. While it may be an attempt by the director to replicate the easygoing Hawaiian mindset, it’s death as a movie going experience, barely engaging the viewer in the narrative. While most film adaptations of novels suffer from having to collapse a dense narrative down to a more manageable two-hour format, The Big Bounce could have used a bit more heft and direction to its script. Is this film a comedy, a heist film or a combination of both? There are only two or three moments that produce a chuckle.

What’s truly distressing is that a cast as strong as the one assembled here has so little to do. Owen Wilson is so laid back that he appears to be sleep walking through some scenes. However in other scenes he manages to deliver some rather poorly scripted dialog with more conviction than it deserves. Gary Sinese is barely in the film, while appearances by Charlie Sheen and Vinnie Jones are both wasted in their small roles. Bebe Neuwirth steals the end of the film out from under the rest of the cast as Ray Ritchie’s alcoholic wife.

About Rich Drees 6949 Articles
A film fan since he first saw that Rebel Blockade Runner fleeing the massive Imperial Star Destroyer at the tender age of 8 and a veteran freelance journalist with twenty years experience writing about film and pop culture.

HISTORY OF THE COMIC BOOK FILM: Dawn Of The X-MEN

It took a lot of cutting corners, but Marvel’s Merry Mutants finally hit the big screen. [click for more]

1. The Princess and the Frog (Disney, 3,434 Theaters, 97 Minutes, Rated G): This is the week where I can’t decide what I think about the films being released. Each film has a lot going [click for more]

New releases this week include SMURFS: THE LOST VILLAGE, GOING IN STYLE and THE CASE FOR CHRIST. [click for more]