John Wilmot, the Second Earl of Rochester (Johnny Depp) is not a likeable man. He moves through late 17th century London as if it his own personal smorgasbord, sampling whatever delights, carnal or otherwise, momentarily engage his attention, though such indulgences seldom seem to bring him more than fleeting pleasure. One of these delights is the young and striking, though not necessarily talented actress Elizabeth Barry (Samantha Morton), whom Rochester takes upon himself to mold into the finest actress in London on nothing more than a whim and a wager. Rochester soon finds that Elizabeth is one of the smartest women he has had met, smart enough to know not to believe him when he says that he is falling in love with her.

Based on the Stephen Jeffreys play of the same name and photographed with a grainy filmstock to reinforce the era’s dank and diminished opalescence, The Libertine is a portrait of a hedonist who has lived to such an extreme that he finds no pleasure in the thrills that others find in flaunting 17th century societal convention. As played by Johnny Depp, Rochester is a man who has so indulged in sensuous pleasures, that they no longer stir him. While his friends carouse rambunctiously around him, Rochester pronounces himself “the cynic of our Golden Age.” He has tasted all of what life has to offer and yet still finds his appetite unsatiated. Depp subtly presents the complex character of Rochester effortlessly. At the beginning of the film Rochester taunts the audience, “You will not like me. You will not like me now and you will like me a good deal less as we go on.” Depp manages to walk the fine line of keeping Rochester unsympathetic yet engaging.

The film is not interested in how Rochester became the hedonist he is or even in how he came to be disillusioned with his pleasure seeking ways. The film opens with King Charles II (John Malkovich) lifting the latest banishment on Rochester, recalling him to London and the Royal Court. While his friends are thrilled to see him back, Rochester seems to be going through the motions of his life, attending the theater and engaging in dalliances with actress, bar maids or anyone else willing to trade a moment or two of pleasure for a shiny coin. 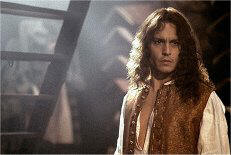 As Rochester’s lifetime of debauchery catches up with him and he begins to succumb to venereal disease, he grows to accept his coming death. Perhaps he sees it as an escape from a life that no longer offers him any stimulation or the fact that one of his own friends has written a stage play based on his life, turning him into the base entertainment that he has come to despise. Either way, Depp brings an air of dignified reservation to Rochester’s final days.

As Charles II, John Malkovich delivers a nice performance as a monarch who is amused by Rochester’s behavior, but knows that he can’t publicly be seen to tolerate it, especially when Rochester stages an obscene play lampooning royalty for the King and a visiting French ambassador. (Malkovich played Rochester in Chicago’s Steppenwolf Theatre production of the play in the mid-1990s.) Rosamund Pike also turns in a strong turn as Rochester’s wife with whose affections he cruelly toys.

Historians may quibble over certain aspects of the real Second Earl of Rochester’s life. Many doubt that he coached Elizabeth Barry in acting, as theses stories only circulated after his death and seem to have originated with Barry herself. But Depp’s portrait of him makes for fascinating viewing.

The PIRATES OF THE CARIBBEAN star is about to add another franchise to his resume. [click for more]

Robert Downey Jr. has dropped out of director Sam Raimi’s Wizard Of Oz prequel Oz, The Great And Powerful leaving studio Disney to open up discussions with Johnny Depp to fill Downey’s vacated role. This [click for more]

PIRATES OF THE CARIBBEAN 5 Filming/Release Pushed Back

The fifth film in Disney’s popular franchise heaves towards a 2016 port. [click for more]