One of the worst things to do when reviewing a film is to take the movie to task for being something it’s not. A poorly written review would rake a film like The Passion Of The Christ over hot coals for not having any zippy musical numbers in it like Jesus Christ Superstar. However, in the case of Exorcist: The Beginning, a prequel to the classic 1973 horror film, it’s tempting to review the film from director Renny Harlin for not being a film by director Paul Schrader. To explain, when Exorcist: The Beginning went into production, director Schrader was at the helm, having promised the studio a psychological horror film exploring the faith and early days of the 1973 film’s title character, Father Lancaster Merrin. Upon delivery of a completed version, studio execs decided that a psychological horror film isn’t what they wanted after all, fired Schrader and brought in Harlin to rework the script and entirely reshoot the film with more of the blood and gore that they expected. But, as the old saying goes, “Be careful of what you wish for.”

The film is a misfire, and aggressively so, on all counts, ignoring what made the original Exorcist film a classic. There’s no real build up of tension or fear, both of which were used with masterful precision in the original. Any scares in the film are cheaply earned through quick edits to a gory image. The studio mandated gore is over the top and oft times badly done.

Story wise, the film lifts from a lot of sources but feels mostly derived from the action films from earlier in Harlin’s career. Merrin is the rough-shaven, disillusioned anti-hero, a priest on the outs with the church. He spends much of his time, running around, trying to figure out what is going on before he has his climactic mano a demon showdown. The revelation that the Vatican had knowledge of what might be behind the mysterious goings on feels lifted from such religious conspiracy stories such as Stigmata (1999) and the recent New York Times bestseller The DaVinci Code. The final confrontation between colonial British soldiers and a group of African tribesmen looks like a low budget community theatre version of Zulu (1964).

The screenplay is a choppy mess. Portions of the film feel like Harlin and screenwriter Alexi Hawley are intent on nothing more than recreating a few moments from the original film, without any of the surround meaning or subtext. One shocking aspect from the original, the demon’s vulgar swearing at Merrin, comes off so badly that the audience laughs. Merrin’s character arc is non-existent. He simply moves through a series of events, until the script needs him to suddenly decide to renew his faith in God and become a priest again. Of course he’ll find his way back to his faith; it’s just that the script devotes no time at all to what should be the most important element of the story. Many scenes are unnecessary, adding nothing to the overall story and just not going anywhere in and of themselves. 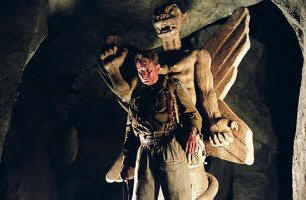 The special effect work in this film is just plain bad. The computer-generated hyenas are poorly rendered while several background composites are poorly integrated with the foreground live action. Harlin is unrestrained with his use of computerized visual effects, never realizing that just because you can put something like a new computerized riff of the original film’s infamous “Spider Walk” sequence, doesn’t necessarily mean that you should. A board of pinned butterflies that suddenly comes alive looks ridiculous and mechanical. Much of the make up, including the boils on Alan Ford’s face, is equally bad.

About Rich Drees 6622 Articles
A film fan since he first saw that Rebel Blockade Runner fleeing the massive Imperial Star Destroyer at the tender age of 8 and a veteran freelance journalist with twenty years experience writing about film and pop culture.

But it won’t be a Hollywood studio film. [click for more]

Will Hercules be able to muscle past the Oscar contenders opening wide this week? [click for more]

1. Monsters vs. Aliens (Paramount/Dreamworks, 4,104 Theaters, 94 Minutes, Rated PG): Wow, talk about a wide release! You hardly ever see a film open in that many theaters. As a matter of fact, I think [click for more]