Christopher Guest has carved himself a specific niche in filmmaking, assembling a cast of actors who basically improv a film off of a basic, skeletal outline. The results have been impressive- Waiting For Guffman (1996), Best In Show (2000) and A Mighty Wind (2003) are all comic gems that have skewered their respective settings of community theatre, dog breeding and folk music. While Guest has already set one comedy in the behind-the-camera world of Hollywood – the more traditionally produced The Big Picture (1989) – he returns to that fertile ground again with For Your Consideration, though the results are less than what one has come to expect from Guest.

Egos and expectations flare when word begins to circulate on the set of a small film of an internet rumor surfaces of a possible Academy Award nomination for the movie’s star Marilyn Hack (Catherine O’Hara). As the gossip circulates through the film’s crew and through Hollywood, it snowballs until much of the cast are expecting to walk down the red carpet to the awards ceremony. Of course, with all the media attention being focused on the project, studio executives begin to take an interest in the hitherto unnoticed production, anxious to get their fingers into the award season pie.

For Your Consideration is a film that is rife with comedic ideas, many of which are probably drawn from writer/director Christopher Guest’s long career in film. Unfortunately, while the movie manages to keep the comedy level high, its narrative never quite jells. Where other of Guest’s films have strong character arcs that carry the story, For Your Consideration’s character arcs are disjointed and lacking. The movie never spends enough time with any one character to allow the audience to truly develop any sort of attachment. Perhaps this is due to Guest’s seeming semi-abandonment of his previous films’ pseudo-documentary style- most of the film looks like it was shot as a more traditional comedy, but every now and again Guest resorts to handheld camera work that recalls his earlier films. It’s as if Guest is second-guessing himself at times. 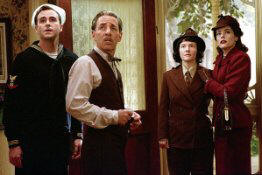 Nevertheless, there are plenty of fine comedic moments in the film. What we see of the film-within-the-film, Home For Purim, comes off as a cross between Tennessee Williams and Yiddish theater. The montage of media appearances the cast makes in conjunction with the film’s release are some of the most biting pieces of satire in the whole film. Over the years, Guest has assembled a great stock company of comedic actors for his films and they all rise to the challenge as best they can. The screen crackles with every frame that features Fred Willard and Jane Lynch as two vacuous entertainment news anchors, John Michael Higgins as a toadying studio PR man, Jane Lynch as a dimwitted producer and the always reliable Eugene Levy as the worst agent in Hollywood. Unfortunately, their hard work is not enough to keep the film from feeling less than the sum of its parts.

Writer/Actor/Director Christopher Guest is starting to gear up for his next semi-improvised film. After poking fun at community theater, dog competitions, folk music and low budget independent films, Guest and his cast will be focusing [click for more]

Spinal Tap, the loudest rock band in the world, will be reuniting for a farewell show and a new mockumentary. [click for more]

Can we just go ahead and make Billy Crystal Oscar host for life? Please? [click for more]