When Jethro Tull lead singer Ian Anderson sang “You’re never too old to rock and roll, if you’re too young to die,” he probably never envisioned the members of Northampton, Massachusetts’ Young At Heart chorus, but its members certainly fulfill that credo.

With an average member age of 80, the Young At Heart Chorus could be the oldest rock outfit still performing. (Please note that I am avoiding any obvious Rolling Stones jokes.) With set lists that cover James Brown to David Bowie to Talking Heads to The Clash, the group is no mere novelty act, as is attested to by the group’s concert that we spend the film watching them prepare for.

Most of the members were probably too old to appreciate their repertoire when it was released, but they sure have a new found understanding of the songs now. They may wince when choir director Bob Cilman pops Sonic Youth’s “Schizophrenia” into the CD player, but as they begin practicing the song, they slowly discover it and make it their own. At some point you realize that the chorus members are having so much fun, you don’t care if they perfect the songs in time for their upcoming concert gig. You just bask in their joy of making music together. 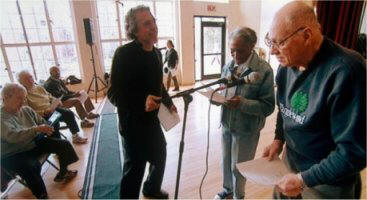 Director Stephen Walker’s camera work insinuates itself into the group fairly seamlessly, taking us along for the fast-paced ride (some times literally) as the group gets ready for their show. The film never tries to condescend to the material or play things too cutely. Sure there’s maybe something darkly ironic about one of the choir members forgetting his solo lines to Jimi Hendrix’s “Purple Haze” of all songs, but moments like that are never played for laughs.

Young@Heart doesn’t shy away from the fact that for all their energy and devotion to the group, its members’ health can be a fragile thing, a fact that is soberly brought home when they lose not one, but two popular members in a close space of time. But the rest of the group doesn’t let such a setback serve as an excuse to cancel their upcoming gig. Rather, they live up to the old show business maxim and go on with the show, knowing that’s what their departed friends would have wanted and saying it’s what they would want the group to do when their time comes. These performances become a way for the group to simultaneously mourn and celebrate their friends, culminating in a hauntingly beautiful cover of Coldplay’s “Fix You” in the film’s finale concert.

Don’t You Forget About Me, an independently produced documentary about John Hughes, has found a distributor less than 24 hours after the director’s passing last Thursday. Montreal’s Alliance Films purchased the documentary by noon last [click for more]

Rolling out of last month’s Sundance Film Festival with some positive buzz is the documentary Young@Heart which looks at a New England senior citizens choir that specializes in rock and roll songs. Sure, one could [click for more]

Never one to shy away from stirring up people’s emotions, Michael Moore is planning a sequel to his biggest and most controversial documentary Fahrenheit 9/11. Paramount Vantage and Overture Films have announced today that they [click for more]