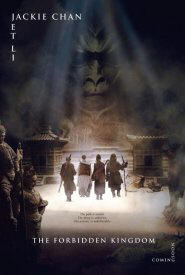 It seems almost inconceivable that fans of Hong Kong action cinema have had to wait nearly two decades for its biggest stars, Jackie Chan and Jet Li, to appear on screen together. It is just a pity that it had to happen inside the confines of the Hollywood-produced film The Forbidden Kingdom. Had it the match-up occurred in a film produced by the film industry that launched Chan and Li’s careers to international stardom, we probably wouldn’t have been stuck with the decidedly mixed-bag of results that Forbidden Kingdom is.

The film opens on Jason Tripitikas (Michael Angarano), a teenager in Boston who cruises dusty old Chinatown pawnshops for video tapes of old martial arts movies. By accident he discovers an ornately carved fighting staff, which magically transports him back to China’s Middle Kingdom. There, he finds himself embroiled in a quest to return the staff to the Monkey King, who will use it to defeat the evil Jade Warlord (Collin Chou). Joining him on the quest are Lu Yan (Chan), who claims to be immortal, a Silent Monk (Li) and the revenge-seeking Golden Sparrow (Yifei Lui), whose family was killed by the Jade Warlord’s men.

The film’s main storyline reads like a greatest hits list of Hong Kong wuxia, martial arts fantasy, films. The influences range from the classic kung fu actioners of the Shaw Brothers Studio to the fantasy-fuelled movies of Tsui Hark. We’ve seen Jet Li play warrior-monk types before, while Jackie Chan is definitely playing a variation of his character from his two Drunken Master films. Yifei Lui’s Golden Sparrow is named after Cheng Pei Pei’s character in the 1966 classic Come Drink With Me, and the title of the film appears as one of her lines of dialogue. And while some Hong Kong fans will find the results derivative, the mash up of elements makes for some good popcorn thrills. Where the film doesn’t work is with its central conceit of a modern day teenager being transported back in time to participate in the adventure. Storywise, the character of Jason adds nothing to the story that couldn’t be added by having the character be a Chinese boy native to the time period. His absent father could be explained away as a warrior killed in battle. His lack of kung fu knowledge could then be accredited to a grieving mother who doesn’t want her son to follow the path that his father did. As it is, the character merely exists as a hook to get the audience involved in the story. That’s a fairly insulting thing for the filmmakers to do, as it states that we don’t have the capacity to be interested in or care about stories featuring characters who don’t look like what we see in the mirror.

Anytime Jackie Chan has a new film out, there is the inevitable speculation about his age and his ability to continue to do the rigorous stunt and action work he is known for. He seems in fine shape here, though admittedly there are a few instances where some stunt doubling might be going on. Many of the fight scenes feature some great wire-harness work, something that Chan has eschewed in his films that take place in the modern world, but are a staple of the fantasy-oriented wuxia genre. While not the best work of master choreographer Yuen Woo-ping, the fight sequences still manage to be more entertaining than a majority of Hollywood’s more traditional action output.

What keeps the film’s action sequences, and by extension the rest of the film itself, from succeeding more is the direction of Rob Minkoff. Hollywood directors can study all the Hong Kong cinema they want and praise it as loud as they can, but until they actually show that they’ve learned something from these films, it is all just hot air. Outside of the sequence that introduces Jackie Chan’s character into the film and the initial meeting of Jackie Chan and Jet Li’s characters, the fight scenes are shot too close and edited in such a way that makes it hard to follow the flow of the fight. Hong Kong directors know to shoot the action wide, allowing audiences to thrill at the actors’ martial arts skills. Hollywood directors are too tied to the editing tricks and visual sleight-of-hand that allows actors to be replaced by stunt men when the fists start flying. Unfortunately, the end result of this is a film that is less than the sum of its parts.

Here are two pictures of the titular Imaginarium Of Doctor Parnassus from director Terry Gilliam. We first told you about Gilliam’s latest film back in October, when we noted that the director’s description of the [click for more]

This summer blockbuster movie season is looking to be one of the strongest in recent memory. Titles like the new Indiana Jones film, Shyamalan’s The Happening, Pixar’s Wall-E, Get Smart, Hancock, The Dark Knight and [click for more]

THE DARK KNIGHT: One Last Trailer

The release of The Dark Knight is now just under two weeks away. Early reviews are starting to hit the nets and the buzz is overwhelmingly positive. I will be seeing the movie at a [click for more]