While not the worst, Universal Studios certainly has not been the best of the major studios at mining their back catalog of films for decent DVD releases. That is why it comes as a pleasant surprise that they have announced the release of special editions DVDs of three Alfred Hitchcock classics and Orson Welles’ Touch Of Evil for October 7.

Alfred Hitchcock masterpieces Vertigo, Psycho and Rear Window will all be getting the two-disc special edition treatment. Each set will feature an anamorphic widescreen transfer of the film, audio commentaries, theatrical trailers and a host of featurettes. Vertigo will sport two commentaries- one featuring the film’s associate producer Herbert Coleman, the restoration team of Robert A. Harris and James C. Katz and other (unannounced) participants, while the second will feature director William Friedkin. Stephen Rebello, author of Alfred Hitchcock and the Making of Psycho, will provide the commentary track for Psycho while John Fawell, author of Hitchcock’s Rear Window: The Well-Made Film, will do the honors for Rear Window. 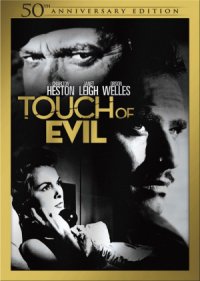 Meanwhile, Universal is also putting together a 50th Anniversary Edition of the Orson Welles classic Touch Of Evil. A great and gritty story of police corruption in a small town on the Mexican/US boarder, the film was taken away from Welles and subjected to new editing and some reshoots under the direction of Harry Keller before being ignobly released on the bottom half of a double bill with The Female Animal.

This two-disc set will feature three versions of the film- An hour and 49 minute “preview version,” the hour and 36 minute “theatrical version” and the 1998 one hour and 51 minute restored version. Each version of the film will feature different audio commentaries. The theatrical version will feature commentary by writer and filmmaker F.X. Feeny, while the preview version will feature Welles historians Joanthan Rosenbaum and James Naremore. The restored version will feature two commentary tracks- one featuring restoration producer Rick Schmidlin and a second with Schmidlin being joined by Touch Of Evil castmembers Charlton Heston and Janet Leigh. In addition to two featurettes and the film’s theatrical trailer, the disc will also come with a reproduction of the 58-page memo Welles fruitlessly sent to studio heads in an effort to get his vision of the film released. It was from this memo that Schmidlin based his restoration work.

All of these releases sound great and even though 75% of these titles already sit on my DVD shelf, I will be looking into picking them up come October.

When Disturbia was released last year, many folks noted the amazing number of similarities between the Shia LaBeouf movie and director Alfred Hitchcock’s 1954 classic Rear Window. Well, it looks like the copyright holder of [click for more]

Every now and then real world events collide with the manufactured realities of Hollywood films. Casablanca got a boast at the box office when its 1943 release happened to coincide with a highly publicized meeting [click for more]

One of the greatest American films is getting a 4k high-def restoration. [click for more]