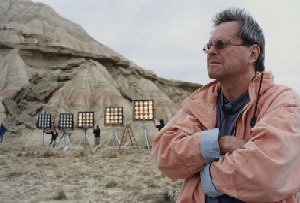 Nearly eight years after it fell spectactularly apart during filming, director Terry Gilliam may be ready to remount his film The Man Who Killed Don Quixote.

In an interview with the British paper The Independent, Gilliam confirmed that he would be reteaming with Johnny Depp, who was set to star in the aborted first version, to have a second go at making the film.

As far as we’re concerned, it’s on,” he confirms. “When Johnny’s ready, we’re ready. We’re just talking about dates to film. Basically it all depends on his schedule but otherwise we’re set. It will be next year some time, before next summer anyway.

The problems that Gilliam faced that lead to the shut down of the original production in November 2000, were chronicled in the documentary Lost In La Mancha. Following the shutdown of the production, Gilliam faced several yaers of legal wrangling to get back the rights to the screenplay, finally suceeding earlier this year. Gilliam also confrimed in the interview that none of the footage that he did manage to get during the first attempt to make the film will be used.

We’re going to completely reshoot it,” he says. “The intervening years have taught me that I can actually write a much better film. I’m so excited it’s going to get done at last.”

Gilliam’s career has been rather rocky since the collapse of Don Quixote. Unable to get a directing job, he finally was hired by the Weinsteins to helm The Brothers Grimm, only to famously and publicly clash with Harvey Weinstein over several aspects of the production. His next film, Tideland, received very little distribution, and remains fairly unknown. This is a shame as I have found the film to be one of the more difficult and interesting films from any director in the last several years. Gilliam is currently finishing up work on The Imaginarium Of Dr. Parnassus, whose production came to a temporary halt midway through, following the death of its star Heath Ledger. I can only hope that Gilliam’s string of bad luck is now behind him as I don’t think as a fan that I could follow another Gilliam production being plagued with disaster.

About Rich Drees 6940 Articles
A film fan since he first saw that Rebel Blockade Runner fleeing the massive Imperial Star Destroyer at the tender age of 8 and a veteran freelance journalist with twenty years experience writing about film and pop culture.

Terry Gilliam’s The Imaginarium Of Doctor Parnassus opens in the UK on Friday, and those lucky Britishers have gotten one last poster for the film. This one features Lily Cole, who as Parnassus’s daughter is [click for more]

Gilliam’s Quest To Make DON QUIXOTE Gets A New Documentary

A new documentary will follow Gilliam’s nearly two decade journey to bring his passion project to the big screen. [click for more]