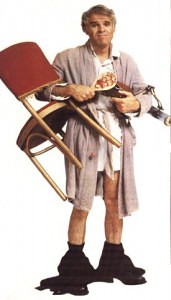 Eyes Wide Shut may be the last film from wunderkind director Stanley Kubrick – he passed away in 1999 while putting the final post-production touches on the project – but it is a film he had been thinking about making for over two decades.

Based on the French novella Traumnovelle, translated to English as Dream Story, Kubrick’s film is a surreal and somber tale of sexual exploration. It is hard to believe that at one time the cinematic auteur contemplated making the film as a sex comedy. In his book Kubrick

, writer Michael Herr details the director’s initial take on adapting the book and his rather interesting choice of lead actor.

Stanley thought it would be perfect for Steve Martin. He’d love The Jerk… I know that his idea for it in those days was always as a sex comedy, but with a wild and somber  streak running through it. This didn’t make a lot of sense to us, we were responding to the text as a work of literary art, and not a very funny one. Maybe Traumnovelleis a comedy in the sense that Don Giovanni is: attempted rape and compulsive pathetic list-keeping, implied impotence and the Don dragged down into hell forever, the old sex machine ignorant and defiant to the end. A pretty severe and unsettling comedy, not very giocoso, and not the essence of Traumnovelle, which more than anything was sinister. Now I think we were all too square to imagine what Stanley saw in Steve Martin, because this was not The Jerk.

Try to wrap your mind around what kind of film this would have been.

About Rich Drees 6833 Articles
A film fan since he first saw that Rebel Blockade Runner fleeing the massive Imperial Star Destroyer at the tender age of 8 and a veteran freelance journalist with twenty years experience writing about film and pop culture.

LOGAN’S RUN Being Planned For 3D

Producer Joel Silver has stated that his currently in development remake of Logan’s Run is being planned to be shot in 3D. Less than a week after the announcement that the project had acquired a [click for more]

Smith Sniffing Around FLOWERS FOR ALGERNON

Will Smith continues his quest to move from box office popularity to critical and award-winning respectability. This time he is reportedly considering starring in a new adaptation of Daniel Keyes’ classic novel Flowers For Algernon. [click for more]

Greengrass Off VOYAGE, Off To TREASURE ISLAND?

Wondering what director Paul Greengrass is going to do now that he has decided to not return for a fourth Bourne film? He seems to be wondering what his next project will be as well. [click for more]