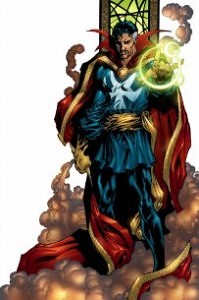 While comic book movie fans have been excited by Marvel Studios gameplan to cross-pollinate their superhero films over the next few years, culminating in the summer of 2011 with the superhero teamup The Avengers, Marvel has already started to look beyond that big event to what their next wave of films will bring.

In an interview with MTV’s Splash Page Blog, Marvel Studios honcho Kevin Feige stated that the mystical side of the Marvel Cinematic Universe could be up next for exploration with a big screen appearance by master sorcerer Doctor Strange.

I’d say in the next year, year and a half, as we start putting together our film slate for 2012 and 2013, I would not be shocked if we saw Dr. Strange on those lists. I love the idea of taping into the magical realm of the Marvel Universe, which is fairly significant and hasn’t yet seen life on screen. It’s something I’m very, very interested in.

I remember two years ago at Comic Con the cover of the LA Times Calendar Section, read ‘Marvel calls out the B team’ and there was a picture of Iron Man. We don’t look at them as ‘B team.’ Dr. Strange? This is one of the best characters we have. [He represents] this amazing cosmic universe to Marvel that we haven’t played with in films yet and I think could be amazing to play with.

Far be it from us to correct him, but it seems like Feige is forgetting that the good Doctor has already been brought to life once before, in a 1979 TV movie starring Peter Hooten. Intended as a backdoor pilot for a possible series, the TV movie understandably died in the ratings as it aired against the cultural juggernaut miniseries Roots. Since then, the character has gone through various development incarnations with the likes of Bob Gale, Wes Craven and David Goyer working to bring the character to the big screen.

Feige also addressed possible future plans for the Hulk. While this summer’s The Incredible Hulk was a hit for the fledgling studio, there is no immediate Hulk 2 sequel scheduled. But that doesn’t mean audience’s have seen the last of the emerald-hued, muscle-bound Jekyll and Hyde allegory.

The truth is that Hulk has had two films in the past five years, and it’s time to give some of the other guys a turn. But certainly what we are doing is suggesting and cross-pollinating the characters between films, and like reading a comic, I’d like to set that expectation that anything can happen — and anyone can pop up — in anybody else’s story. I would expect that people may see the Hulk again soon before he is again carrying his own film.

So, does the Hulk turn up in May 2010’s Iron Man 2, returning the favor after Iron Man star Robert Downey Jr. made a quick cameo appearance at the end of Incredible Hulk? Is Marvel planning on having the Hulk appear in the Avengers movie? And what do you think of the Hulk possibly becoming a supporting player in other superhero’s films?

About Rich Drees 6729 Articles
A film fan since he first saw that Rebel Blockade Runner fleeing the massive Imperial Star Destroyer at the tender age of 8 and a veteran freelance journalist with twenty years experience writing about film and pop culture.

While 2004’s Hulk film from director Ang Lee wasn’t well received by comic book fans or the general moviegoing public, the studio thought that there was still something to the concept of adapting Marvel Comics’ [click for more]

Director Ridley Scott is returning to the franchise he launched in 1979, Alien. The new film will be a prequel, which will presumedly look at how at relentless alien killing machines wound up on the [click for more]

Yesterday at the Philadelphia WizardWorld comics convention, Max Brooks spoke briefly about the forthcoming adaptation of his popular zombie novel World War Z. During an hour long question and answer session in which Brooks talked [click for more]