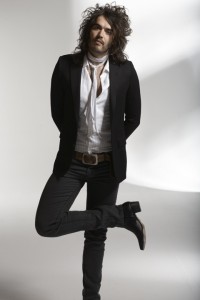 British comic Russell Brand is looking to star in a remake of the 1981 Dudley Moore comedy Arthur.

The Hollywood Reporter states that Brand is currently seeking out a writer to draft a screenplay for a new version of the tale of a drunken playboy who finds love with a working class woman much to the disapproval of the rest of high society.

The title role of a drunken aristocrat certainly plays into Brand’s own bad boy image. Though not well known on this side of the Atlantic, Brand has made a name for himself in England for his outrageous antics. This past summer he may have went a bit too far when Brand and talk show host Jonathan Ross placed a series of prank calls to Fawlty Towers star Andrew Sachs, leaving obscene messages on Sach’s answering machine about his granddaughter, whom Brandt had been involved with for a time.

No director has signed on to the project yet.

About Rich Drees 6728 Articles
A film fan since he first saw that Rebel Blockade Runner fleeing the massive Imperial Star Destroyer at the tender age of 8 and a veteran freelance journalist with twenty years experience writing about film and pop culture.

Nichols, Mamet And Scorsese All Tapped To Remake Kurosawa’s HIGH AND LOW

Akira Kurosawa’s detective drama High And Low is being set up for an English language version with Mike Nichol’s in the director’s chair, David Mamet on screenplay duties and Martin Scorsese serving as executive producer. [click for more]

The main casting of the new Star Trek film is finally complete and Trekkers all over the world are putting the cast under intense scrutiny. I wouldn’t say that I was a hardcore Trekker, but [click for more]

In what can only be possibly described as the best casting news of perhaps the entire year, Simon Pegg has been given the role of Engineer Montgomery “Scotty” Scott in J. J. Abrams upcoming Star [click for more]