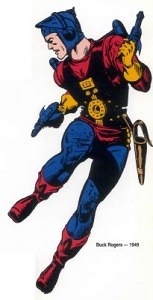 While the early reviews for his comic book adaptation The Spirit have not been all togeter promising, comic book creator-turned-director Frank Miller is already looking forward towards his next film project- bringing iconic science-fiction adventurer Buck Rogers back to the big screen.

Miller and his Spirit production company Odd Lot Entertainment are currently negotiating with Nu Image/Millenium for the film rights to the seminal science-fiction hero. Miller is expected to both write and direct the film. Whether he does this before he reunites with Robert Rodriguez for the sequel to their popular Sin City remains to be seen.

If Miller does make this his next project, I hope that he decides to go with a different visual look for the film. While I like how he, along with co-director Robert Rodriquez, captured the look of his Sin City graphic novels in the film of the same name and the fact that he looks to be expanding that style in The Spirit, I would like to see him experiment a bit more and try something different. I have a feeling that if The Spirit does come under fire from critics, the look of the film may be one thing negatively remarked on by many. If Miller expects to have a lasting career in film, he is going to have to show some versatility.

Via The Hollywood Reporter.

About Rich Drees 6742 Articles
A film fan since he first saw that Rebel Blockade Runner fleeing the massive Imperial Star Destroyer at the tender age of 8 and a veteran freelance journalist with twenty years experience writing about film and pop culture.

There’s another director for Warner’s perpetually in development Logan’s Run remake. This time it is a commercials director Carl Erik Rinsch, who had been previously tapped to relaunch 20th Century Fox’s Aliens franchise before being [click for more]

GREEN LANTERN Getting Closer To Greenlight?

Green Lantern could be the next superhero making its way to the big screen from Warner Brothers. That’s according to Alan Horn, Warner Brothers Studio honcho, when questioned by Collider as to the status of [click for more]

Sony Picks Writer For SPIDER-MAN 5 And 6

Cameras aren’t scheduled to begin rolling on the fourth installment of Sony Pictures’s Spider-Man comic-book franchise, but the studio has already hired a writer to begin working on a fifth and sixth installment of the [click for more]