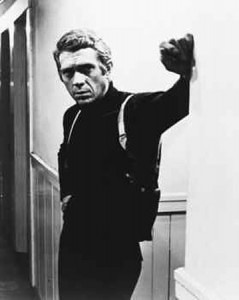 Steve McQueen may be coming back to the big screen in the form of a biopic that will chronicle the iconic star’s Hollywood career.

Variety is reporting that Producers Michael Cerenzie and Christine Peters have acquired the film rights to to Marshall Terrill’s biography Steve McQueen: Portrait of an American Rebel. Variety also reports that the book “also delves into McQueen’s offscreen penchant for motorcycles, fast cars and drugs” and the film”will examine his three marriages, including his stormy relationship with Ali McGraw, as well as his battle against lung cancer.”

No writer has been hired, but Cerenzie and Peters are close to attaching a director.

While I would definitely be intrigued to see a cinematic examination of McQueen’s life, I think the obvious question that needs to be asked is “Who do you get to star in the film?” I can’t think of any actor who remotely looks like McQueen, let alone comes anywhere near having the kind of screen presence McQueen did. The fact there has been no other actor like him is what keeps us fascinated with the actor and his work today, nearly three full decades since his death.

And how in depth will they cover the early part of his career. Granted, I’d love to see them do a small part about his first headlining role in 1958’s The Blob. They could even film it on location in Phoenixville, PA as many of the original locations used in the film are still there.

Earlier this week, we told you about Johnny Depp’s casting as the Mad Hatter in director Tim Burton’s adaptation of Lewis Carroll’s classic Alice In Wonderland. The film is going to be a combination of [click for more]

In an interview with the Boston Tribune published over the weekend, Quentin Tarantino has confirmed that, at long last, he is definitely done writing the screenplay for his World War II epic Inglorious Bastards. “I’ve [click for more]

Although on hand at this weekend’s New York Comic Con to discuss his upcoming comic book adaptation Hellboy II: The Golden Army, Guillermo del Toro took a few minutes to address what might be next [click for more]

Funny, b/c on many of the Bond sites: a lot of postings state how Daniel Craig could play a great McQueen.

Good choice. I’m embarrassed to admit that I didn’t think of Craig for the role. That’s interesting choice, and he certainly has piercing blue eyes to McQueen. (I should have remembered Craig as I’m off to see DEFIANCE tonight.) The only question would be if he would be able to pull off the accent.

McQueen was the epitome of cool!

McQueen was my go to guy for films.