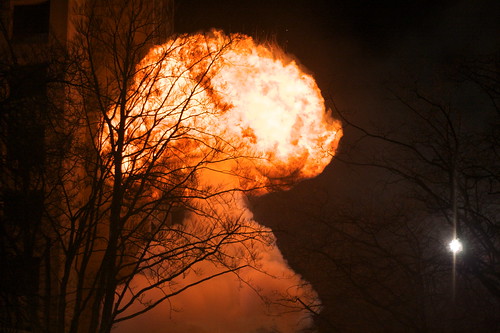 Well, so far there have been no reports of the promised journalist visits to the set of the reshoots going on for X-Men Origins: Wolverine. However, while the production was doing some night shoots at the University of British Columbia a few nights ago, plenty of onlookers grabbed some photographs and have started posting them up online.

There’s not a whole lot to see, some explosions (like the one at left from Flickr user tyfn)and some barb-wire fences. I’m not sure if the production has shot at this location before, in which case they may be beefing up a previously filmed scene, or if this is a new location and a possible new scene added to the film.

You can check some other Wolverine location shooting photostreams at Flickr here, here, here and here.

It hasn’t been officially announced yet, but Jon Favreau has confirmed to the LA Times’ Hero Complex that development on the script for Iron Man 2 is already underway. “We’re working on it now,” he said, [click for more]

I have to admit that I am a little leary about director Ridley Scott’s upcoming take on the Robin Hood legend. Not because I don’t like the director’s previous work. Far from it. I think [click for more]

First Photos Of ME AND ORSON WELLES

He may be the heartthrob for millions of `tween girls right now, but High School Musical star Zac Ephron appears to know that such fame is fleeting and not the stuff long acreers are made [click for more]