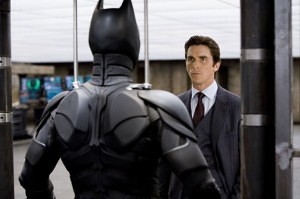 If you like Batman movies, Warner Brothers is aiming to make you happy over the coming years.

Today during an earnings conference Warners CEO Jeff Bewkes stressed that that the studio was looking towards franchise films like the Harry Potter series and the Batman films providing profitable returnsfor the studio in the coming years.

We look at Harry Potter. It’s fantastic to have franchises that last that long. We want to do that with Batman and Superman and perhaps Sherlock Holmes. The sequels are as good, with new characters added, as were the originals. That wasn’t the case in the years ago. Warners has more tentpoles as an on-going strategy that very much lifts its distribution and performance. We think that’s going to hold up our slate in the 2009 – 2010 period. We’ve got four more big tentpoles coming this year.

It is understandable that Bewkes, or any studio for that matter, is looking for reliable, stable revenue streams. Even in the best of economic times, making a movie is always a multi-million dollar crap shoot. A couple of bad, expensive films in a row and a studio could find itself in some serious trouble and its executives may find themselves wondering about their future employment prospects.

Currently, Dark Knight director is just starting to flesh out a story for his third Batman film. However, I believe he was only signed to do three films to begin with, and I don’t see Nolan as wanting to be the guy who just makes the big blockerbuster movies. This will leave Warners with a particularly tough decision to make- who will take over the creative reins of the franchise? No pressure there, I’m sure…

Via SlashFilm and Silicone Alley Insider.

As the old show biz saying goes, you are only as successful as your last hit and with Iron Man having pulled in over half a billion dollars at the box office worldwide, star Robert [click for more]

Every year up to now, people have complained that their favorite movies never made the cut when Oscar time rolled around. Now, the complaints will be about an undeserving film getting a nod. And probably [click for more]

Tiny Lister, who excelled in roles ranging from bodyguards to presidents, has passed away. He was 62. [click for more]