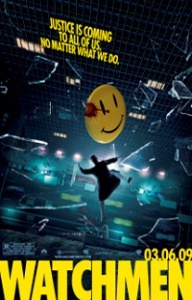 1. Watchmen (Warner Brothers, 3,611 Theaters, 163 Minutes, Rated R): They are a skittish group, these comic fans, especially when it comes to movies based on their favorite heroes. They complain when plot elements change, get upset if the costumes are a bit off, and let you know when they think a hero has been miscast. But no comic book property has created as much agita, excitement, controversy and discussion as Watchmen.

The reason for this is the unbelievable impact the Watchmen miniseries has had on the world of comics. It is the Citizen Kane of  the four-color medium. I’m not saying it is as good as the Orson Welles masterpiece, all you who are mocking me out there now, but it stands as the best comic book series in the almost 80-year history of the art form. It is the work that all other comics are compared to. It is the one work many comic fans insist the uninitiated read first if they want to experiment in the world of graphic novels.

In a time when comic book movie deals were virtually unheard of, it escaped the morass and it’s option was picked up  And it began an over 20 year trek to the silver screen. Finally, journey is over, and we have our Watchmen film.

But some fans never wanted a Watchmen film. They thought like Catcher in the Rye that it couldn’t be made and shouldn’t ever reach the screen. That there would be no way to ever capture the genius laid out by Alan Moore and Dave Gibbons.

But we are on the crux of what appears to be a slavishly faithful adaptation of comicdom’s greatest work. This, ladies and gentlemen, is the ultimate comic book movie. The rest of the world will now see what the comic book is truly capable of.  I’m sure I’m not alone in hoping that, now, comic books will get a modicum more respect than they currently get.

Will Hercules be able to muscle past the Oscar contenders opening wide this week? [click for more]

Is Warners Giving Up On Its DC CINEMATIC UNIVERSE?

Word has it that lackluster response to BATMAN V. SUPERMAN’s advance hype has Warners worried, and the entire slate might be in jeopardy. [click for more]

It’s a salute to originality this week as we get a sequel, a book adaptation, and an adaptation of a cartoon that was based on a toy line. 1. Blade Runner 2049 (Warner Brothers, 4,058 [click for more]