Even when his films don’t succeed as hoped on a storytelling level, Tim Burton’s films have always been interesting to look at. USAToday has our first look at his latest film and it should come as no surprise that it too holds the promise of fascinating and imaginative visuals. Of course, since the film is based on Lewis Carroll’s Alice In Wonderland, Burton has found the perfect material to fuel his Victorian-gothic-on-an-acid-trip sensibilities.

The USA Today article also divulged some plot details, specifically, that the film is not a straightforward adaptation of Carroll’s novel, but more of a sequel. It opens with a seventeen-year-old Alice (Mia Wasikowska)fleeing from a snotty garden party and an impending marriage proposal only to follow a certain White Rabbit down a rabbit hole to Wonderland. As she explores the new world she finds herself in, she discovers that she had visited there before, but has no memory of it.

Burton will be bringing his story to life through a combination of live action, CG and motion-motion animation.The director is currently deep in post-production following a speedy, 40-day shooting schedule that ended at the end of last year.

Joining Burton on this trippy voyage into Carroll’s Wonderland is his frequent collaborators Johnny Depp as the Mad Hatter and Helena Bonham Carter as the Red Queen (below). Also in the cast areAnne Hathaway, Matt Lucas as Tweedledee and Tweedledum, Alan Rickman as the Caterpillar and the recently knighted Sir Christopher Lee as the Jabberwock. 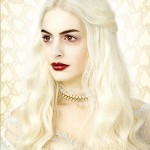 About Rich Drees 6692 Articles
A film fan since he first saw that Rebel Blockade Runner fleeing the massive Imperial Star Destroyer at the tender age of 8 and a veteran freelance journalist with twenty years experience writing about film and pop culture.

The actor sells Disney on two films which he will produce and star in. [click for more]

Hollywood loves adding their own spin to existing properties–usually with dire results. But their unique brand of meddling is getting worse. [click for more]

Pfeiffer And Bonham Carter Up For DARK SHADOWS Roles

It seems to be a truism that if you’re an actor who has worked with Tim Burton once, you have a good chance of working with the director again. Today we have learned that the [click for more]