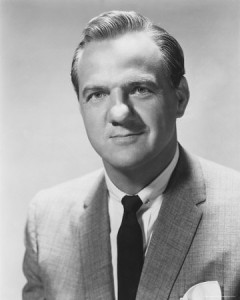 Karl Malden, the durable and revered Academy Award-winner who appeared in some of the most iconic and controversial films during the 1950’s, died earlier today at the age of 97.

The character actor instantly recognizable for his bulbous nose, Malden spent his career playing a variety of characters from the sympathetic priest in On The Waterfront (1954) to General Omar Bradley in the 1970 war bio-pic Patton. Conscious that his looks would never land him romantic leading roles – he would joke that he was “the only actor in Hollywood whose nose qualifies him for handicapped parking” – Malden carved out a career playing average guys in often trying circumstances.

Born Mladen Sekulovich on March 22 of 1912, in Chicago, Illinois, Malden regrettably knew he would need to change his name if he was to succeed in the acting business. He faithfully studied acting at Chicago’s Goodman Theatre before moving to New York. He made his stage debut in 1937  in Golden Boy by Clifford Odets. It was in New York that he met Elia Kazan, the director who would later guide Malden to reputable stardom in A Streetcar Named Desire and On The Waterfront.

He worked in film beginning in 1940, but didn’t see screen time for another four years, taking his Winged Victory role from the stage to the silver screen. However, his portrayal as the genuine-hearted Mitch in the 1951 film classic A Streetcar Named Desire earned him not only universal respect but also a golden Oscar statuette for his earnest performance. Shortly after, his Hollywood career soared and he grabbed a worthy, meaty role as a priest unafraid to dispel the truths of working society, teaming with Streetcar director Kazan and co-star Marlon Brando for On The Waterfront. Malden would receive an Best Supporting Actor Oscar nomination for his work in the film.

One of his most memorable, yet controversial roles, was in 1956’s Baby Doll. His role as Archie Lee Meighan drew much ire from the Catholic Church and the film was seen as questionable and highly immoral. The film was condemned by almost 20 million Catholics all across the country and even  didn’t value the movie as watchable. Nonetheless, the film has embraced its cult status and is still a subject of many a conversation from film buffs today.

Malden will not be forgotten for his impressive work in more than 50 films including Hitchcock’s I Confess (1953), the excellent baseball flick Fear Strikes Out (1957) with Anthony Perkins, and the deliciously wicked Dead Ringer (1964) opposite Bette Davis.

He made the leap to television in the 1970’s, starring as Det. Mike Stone, a street-wise veteran cop who mentors a young Michael Douglas in The Streets of San Francisco, earning four Emmy Award nominations for Best Actor. Most might remember Malden best for his commercial spots in the 1980s pushing the value of the American Express Card.

Arthur C Clarke, the noted Grandmaster of literary science fiction who collaborated with filmmaker Stanley Kubrick to create the landmark film 2001: A Space Odyssey, has passed away in Sri Lanka early this morning. He [click for more]

One of the most talented and prolific character actors has passed in his Los Angeles home. [click for more]

Alexander Courage, the composer who wrote one of the most recognizable television theme songs ever for the series Star Trek has passed away in Palisades, California at the age of 88. His passing on May [click for more]