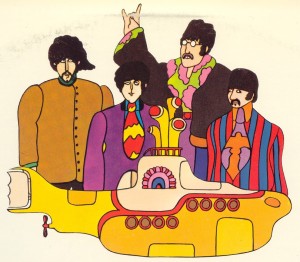 Robert Zemeckis is planning a trip to Pepperland. Using the same motion-capture animation techniques that he used for Beowulf and the upcoming A Christmas Carol, Zemeckis is gearing up to remake Yellow Submarine, the classic animated film featuring the Beatles. Variety is reporting that Disney lawyers have been working for the last several months to clear up rights issues surrounding the possible project, which could also spawn Broadway and Cirque du Soleil stage productions.

In the original 1968 animated film, the Fab Four are recruited to help defend the undersea world of Pepperland from the invading Blue Meanies. Featuring numerous Beatles songs and some rather trippy design and animation, the film was a definite hit with audiences, who sometimes brought along their own recreational pharmaceuticals to further enhance the experience.

Normally, the type of motion capture technology Zemeckis uses for his films helps to make the three-dimensional, computer generated animation move more realistically and life like. Is Zemeckis planning on mapping the original film’s psychedelic character design on to realistic, motion-captured movement? Definitely an intriguing thought, especially since Zemeckis is planning on doing the film in 3D.

With Paul McCartney in the midst of a sold out tour and anticipation building for next month’s release of the Beatles  supplement for the Rock Band video game, there certainly is a boom in interest in the Fab Four. But will that interest still be there in 2012, when Zemeckis hopes to premier the film in conjunction with the Summer Olympics?

The rights to remake the 1952 western classic High Noon were purchased earlier this week by producer Mark Headley, actor Christopher Mitchum and their business partner Toni Covington. The trio is operating under the umbrella [click for more]

Actor John Cho, best known for his role of Harold in Harold & Kumar Go to White Castle (and its forthcoming sequel), has been cast as Lt. Hikaru Sulu in J.J. Abrams Star Trek film. [click for more]

Yesterday at the Philadelphia WizardWorld comics convention, Max Brooks spoke briefly about the forthcoming adaptation of his popular zombie novel World War Z. During an hour long question and answer session in which Brooks talked [click for more]