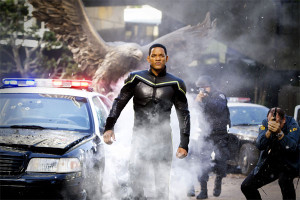 Will Smith’s return to superheroics took another step forward with the hiring of Adam Fierro and Glen Mazzara to script a sequel to Smith’s 2008’s summer blockbuster Hancock.

In the original film, Smith played an alcoholic superhero who has no memory of how he gained his powers. The Hollywood Reporter states that the film’s original production team, including director Peter Berg, are expected to return for the follow up.

If Will Smith indeed has a superpower, it is the incredible ability to take a really crappy movie and still turn it into a big moneymaker for a studio. Such is the case with his summer 2008 superhero film Hancock. Myself and many other critics didn’t like the film at all, but still managed to pull over $624 million at the box office. And that kind of box office take makes a studio think sequel.

But while I thought Hancock had some serious flaws, mostly due to the near dozen years that its script went through numerous writers and rewrites, I am not too put out by the possibility of a sequel. One of my complaints with the film was that the mythology behind Smith’s character and his origin was never really explained. In its place was a vague line or two about where he may have come from. Without a deeper understanding of his origins, the limitations about his power and what happens when gets in proximity with another of his kind simply felt like plot devices. If a sequel will delve deeper into the character’s backstory, then I am intrigued.

My main concern is Berg’s apparent involvement with the proposed sequel. While Hancock‘s long development process did dull many of its sharp satiric edges, Berg’s direction was all over the place in regards to its tone. With him being involved with the project from the beginning rather than being brought on board at the last minute, Berg will have a better grasp of the material this time around.

Fans attending the San Diego Comics Con are discovering how classy that city is now. But if you want to find out it if stayed classy in the 1980s, you may not have to wait [click for more]

Will We Ever Get To Go To Visit The RED STATE?

Hancock couldn’t decide what it wanted to be so it was all three–alternating between the first two in the first half and the go the traditional superhero route during the last half withno connecting tissue between. Hopefully, the sequel will be more consistent.