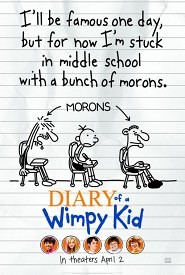 1. Diary Of A Wimpy Kid (FOX, 3,077 Theaters, 120 Minutes, Rated PG): When I looked towards 2010 as a fan of the comic book movie, I thought it would be a rather light year. Too my surprise, it will be a pretty full year for graphic novel adaptations. And it all starts off this week.

Granted, Diary of a Wimpy Kid isn’t a normal comic books. It exists only as a series of hardcover, kid-friendly graphic novels. But it follows the same rules as the comic book and is enormously popular. So I’m going to count it.

The story focuses on the adventures of a middle school-aged kid who must deal with the torment of not being as popular as he’d like to be. He deals with his station in life by trying to rise above it and by writing sarcastic missives in his diary—er—journal.

If everything goes right, this might be the film that unseats Alice in Wonderland at the box office. 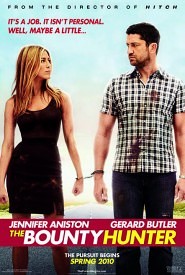 2. The Bounty Hunter (Sony/Columbia, 3,074 Theaters, 110 Minutes, Rated PG-13): Witness the strange case of Gerard Butler. He broke on the scene in the movie musical Phantom of the Opera. He became a star in the ultra-macho 300. Now he seems to be spending his career trying to appeal to audiences for both those films by playing a series of growling, manly action-ready characters in a series of rote and formulaic chick flicks.

Has it been working? Last year’s The Ugly Truth, in which he followed the same formula, was  lambasted by the critics (only 14% fresh at Rotten Tomatoes) but qualifies as a hit, especially overseas where it tripled its production budget.

This film, where Butler plays a bounty hunter hired to track down his ex-wife only to become embroiled in a plot against her life, seems to be just as awful as The Ugly Truth. He’s with Jennifer Aniston this time instead of Kathrine Heigl. Will that make a difference? We’ll see. 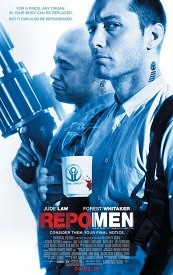 3. Repo Men (Universal, 2,522 Theaters, 111 Minutes, Rated R): This film can’t help but bring up memories of the 1984 film Repo Man. But one wishes that this film has some of the subversive satire of the other.

This film takes place in a future where human life is extended through artificial organs bought on credit. People who fall behind on payments can soon find their life-saving mechanical organs be repossessed.

Jude Law plays one of the best organ repo men around. He unfortunately has a cardiac incident and becomes a client of the corporation he works for. When he falls behind on payments, he has to fight for his life against other repo men like himself.

This film could have a lot of commentary about the current health care crisis gripping this country today. But it seem like the film devolves into a mindless actioner by the third act. Maybe I’m wrong, but that’s how the ads make it seem.

On Friday, we reported on some names of young actors started to appear on various sites purporting to be the final casting choices for some of the heroes and villains who will be featured in [click for more]

I have to admire the tenacity of Warner Brothers in their attempt to make a live action adaptation of the classic manga and anime Akira. First it’s in development, then it’s dead, then it’s back [click for more]

Kenneth Branagh, the actor/director best known for adaptating various Shakespeare plays to film in the 1990s, is currently in final negotiations to direct Thor, an adaptation of the Norse god-turned-superhero comic book character, for Marvel Studios. [click for more]