1. How To Train Your Dragon (Paramount/Dreamworks, 4,055 Theaters, 98 Minutes, Rated PG): I’m kind of glad that we have gotten to the point that people have been divided into Pixar camps and Dreamworks camps. It reminds me of the classic Disney versus Warner Brothers argument from the heyday of cel animation. In my opinion, not that Dreamworks is awful, but Pixar is vastly superior. But I digress…

This story is about a Viking youth who instead of killing a dragon as a rite of passage, decided instead to befriend and train the mythical creatures. This, of course, does not sit well with his tribe, and he must fight to protect his way of doing things.

Just an FYI, buzz abounds that this film will be the first where tickets to the 3-D showing will cost you $10 more per ticket. I, for one, am happy this is happening. Because something has got to kill the odius 3-D trend, and doubling the cost of a ticket for the silly trend in a shaky economy is something that will prove fatal. Then I won’t have to search so hard for 2-D showings any more. 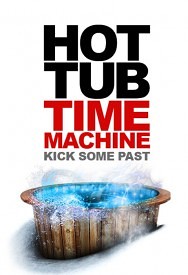 2. Hot Tub Time Machine (MGM, 2,754 Theaters, 100 Minutes, Rated R):  I was a bit taken aback when I first saw John Cusack in this film. You usually think of him in more serious fare like 1408 or Grace is Gone or higher brow romantic comedies like Must Love Dogs, High Fidelity or America’s Sweethearts. You don’t automatically think of him in silly, man-child comedies such as this one.

Then I remember that Cusack got his start in the silly films of Savage Steve Holland–Better Off Dead and One Crazy Summer. He excelled in those films, so this one is like a return to his roots.

This film is about four friends who through a way ahead of its time hot tub, are able to go back in time to 1986. The trip to the past allows the four to right wrongs, rekindle romances, and wreak havoc.

Need a breather from the summer blockbuster season? Well, this week is for you! [click for more]

If you were looking forward to seeing the upcoming remake of Red Dawn or the Joss Whedon-produced horror film Cabin In The Woods, you’re going to have wait a bit longer. Although both films are [click for more]

Yes, Wonder Woman Will Be In BATMAN VS. SUPERMAN And Gal Gadot Will Be Playing Her