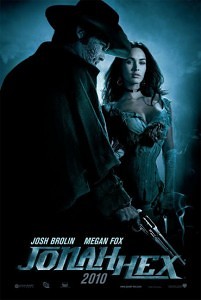 About 15 minutes into Jonah Hex, I started thinking about Josh Brolin’s teeth. I was thinking–were they accurate? There had to be dental hygiene back in the old west–tooth powders and whatnot, but Jonah’s mouth is constantly scarred open. Even if Hex was a regular brusher, he’d have to be open to all kinds of bacterial. His teeth shouldn’t look as good as they did in the film.

The fact I was think of this instead of being enraptured in the scene that was going on up on the screen illustrates an interesting dichotomy about the film. It is amazingly short, yet almost completely boring. And the reason why it is so boring, strangely enough, is because it’s so short.

There is a good film in the material provided, but the film needed to be developed far more, especially when it came to the characters. But this was a make it cheap, get out fast and take as much money as you can kind of thing. And a look at the weekend’s grosses shows there will probably not be a lot of money to get.

Hex is seeking revenge against Quentin Turnbull (John Malkovich) for slaughtering his family, but except for one brief exception we get to see no interaction between the Hex clan. Turnbull slaughters Hex’s family because Hex was responsible for the death of his son, yet we don’t see any interaction between father and son or the events that led to the son’s death. Hex has a relationship with the hooker Lilah (Megan Fox), but we never see how that pairing developed or what the two see in each other.

The addition of the “talking to the dead” superpowers to Hex isn’t as odious as I feared, outside of the fact they are another way to speed up the film. Why have Hex act as a bounty hunter and track down Turnbull from town to town when he can just touch a dead guy and have him tell Hex the information he needs. But the powers are used to good effect and create one of the best scenes in the film, one between Hex and Turnbull’s son Jeb (played in an excellent cameo by an uncredited Jeffrey Dean Morgan, the “Dean” of DC Comics adaptations after this film, The Losers, and Watchmen.). There is more emotional depth and character development in their short scene than there was in the whole movie. It was almost painful to watch because you can see  how good the film could have been.

And yes, the acting is not all that good. Malkovich pretty much sleep walks through the role and Fox shows the depth of a Barbie doll in her performance. And actors such as Michael Shannon, Aidan Quinn and Wes Bentley are wasted (which brings up an interesting future rule of thumb: if you see Bentley in any comic book adaptation, stay far away. His track record between this and Ghost Rider isn’t all that good). But we really don’t care because we really are not attached to the characters.

Which really dooms the film. It seems that it wants to be an over-the-top, don’t-think-that -much-about-it summer blockbuster but its whole plot revolves around betrayal and loss–two things that work better with subtlety and thought put into it. Jonah Hex might not be the worst film I’ve seen, but it is by far the most disappointing.

Marvel Studios 10th Anniversary Class Photo: Who Was Missing And Why

Do you want to know why your favorite star wasn’t in Marvel Studios’ “Class Photo?” We try to explain why inside. [click for more]

HISTORY OF THE COMIC BOOK FILM: Before WATCHMEN

Before we look at the movie it spawned, we discuss why the WATCHMAN comic book series was so important. [click for more]

“Watchmen is a massive spectacle unlike anything you’ve ever seen.” So enthuses director Zack Snyder about his adaptation of the classic graphic novel at the end of the promotional video embedded below. But will we [click for more]