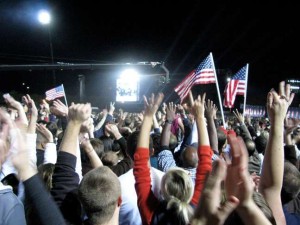 No matter how you may or may not have voted, there is no denying that Election Day 2008 was of more historical import than most. In the weeks leading up to Election Day, many felt a growing excitement and energy as the country grew closer to casting their votes. Wanting to capture the peaking of this crescendo, Jeff Deutchman asked friends and associates around the world to pick up cameras and document November 4, 2008 on video and send him the footage. The edited result is 11/4/08, a tone poem that captures in a way like no other could the overwhelming spirit and emotion that griped many that day.

The film covers nearly 20 hours of the historic day, starting with get out the vote volunteers psyching themselves up for one last marathon day of work. In Chicago we meet two voters who are excited to be casting their ballots in candidate Barack Obama’s home district even though his appearance at the polls will now surely mean that they will be late for work. Nervous excitement grows through the day. A young girl in Alaska knows that the day will be important, even if she is not sure as to why. Around the world eyes are turning towards the United States as it grows closer to the time that election results are to start being announced. In Paris, Dubai and Berlin, Americans abroad and foreigners alike gather to await the news.

Although the film follows mainly Obama supporters, it does maintain a certain objectivity. There is no connecting narration and title cards only give us the scantest information of time and place. Strictly observational footage captures the action as the day builds towards the announcement that Obama has won the election. But not everyone is caught up in the day’s excitement. A Chicago woman wonders if Obama supporters are voting for him based on his stated policies or for other reasons. In Manhattan, a subway-riding young Republican thinks that there will be a change in the country no matter who is elected, while a convicted felon in St. Louis, unable to vote, sits by and voices doubt that anything will change personally for him.

Deutchman’s unique crowd sourcing approach to this film is probably the one only way it could have been made with the scope that it encompasses. And it brings numerous interesting collaborators into the process including such indie directors Henry Joost (Catfish) and Joe Swanberg (Hannah Takes The Stairs) and Independent Spirit Award winning documentary director Margaret Brown (The Order Of Myths). And the film is just the first part of a cross-platform approach that he is taking to documenting that day, launching a website that will serve as an exchange of footage shot on that date from the contributing filmmakers as well as video shot by ordinary citizens.

All wars are filled with stories that can only be told years or even decades after the conflict has ended. The incredible story of Juan Pujol, one of World War ll’s most masterful double agents, [click for more]

“To be or not to be, that is the question.” This is one line from literature most everyone has heard but, because it is such a commonplace line, most people have not actually thought about [click for more]

Sam Bell is going a little bit stir crazy. Coming up on the end of a three year stint stationed on the dark side of the moon, Sam (Sam Rockwell) has been the only human [click for more]