We know that pre-production design work is currently being done for Ridley Scott’s Alien prequel over at England’s Pinewood Studios. We know that Scott has hinted that the film’s plot will possible involve more of the race of the dead alien that crew members of the Nostromo discovered in the original 1979 Alien and nicknamed the “Space Jockey.”

Some possible design work for those aliens have surfaced courtesy of the site Scriptflags. They don’t claim to authoritatively state that these drawings are indeed authentic, though if a take down notice arrives in my email box over the next 48 hours, we’ll probably have our answer.

In the meantime, here’s something to mull over while digesting your Thanksgiving feast today. (Click on image to enlarge.) 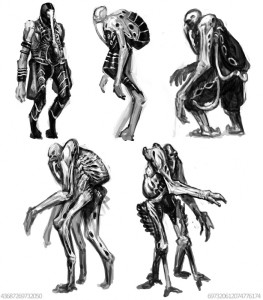 And for comparison, here’s the original from 1979. 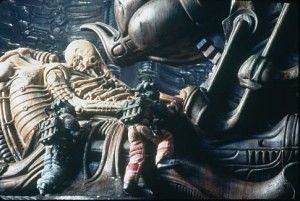 Updated: Turns out these are not official pre-production sketches, but the work of artist Doug Williams for his blog Please Look At Me Neil Blomkamp. Still, interesting work, no?

About Rich Drees 6996 Articles
A film fan since he first saw that Rebel Blockade Runner fleeing the massive Imperial Star Destroyer at the tender age of 8 and a veteran freelance journalist with twenty years experience writing about film and pop culture. He is a member of the Philadelphia Film Critics Circle.

A couple of news tidbits about Ridley Scott’s upcoming Alien prequel popped up over the weekend – One that’s probably only interesting to tech geeks and one that should thrill all of the franchise’s fans. [click for more]

The Swiss artist who created the look of the most terrifying aliens to hit the big screen dies after a fall at home. [click for more]

Judging by their reactions, the producers weren’t big fans of the movie they were making. [click for more]