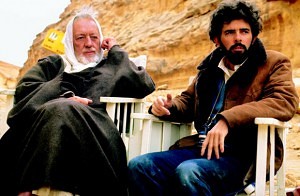 In 2004’s Sky Captain And The World Of Tomorrow, director Kerry Conran used digitized footage of Sir Laurence Olivier to get one final performance from the long deceased actor. If British Mel Smith is to be believed, George Lucas is looking to one up Conran. Smith has told the London tabloid the Daily Mail that Lucas has supposedly bought up the likeness rights to several great, dead actors with the intention of adding them into a film via digital manipulation-

He’s been buying up the film rights to dead movie stars in the hope of using computer trickery to put them all together in a movie, so you’d have Orson Welles and Barbara Stanwyck appear alongside today’s stars.

Now we know that Lucas loves his digitally created effects. And by many reports, he is not that great at dealing with flesh and blood actors when shooting a film. So it does make a but of senses that he may would be looking at removing the human factor from movie making altogether. Of course, it doesn’t take into account that while you could probably digitally add a computer generated character that looked like a famous actor into a movie, but you wouldn’t be able to authentically recreate their performance.

Now before we all go crazy over this news there are a few things to remember. The first, and most important thing is that this story is originating in a London tabloid, so that is several strikes against it’s credibility already. Also, although Smith worked for Lucas when he directed the poorly-received comedy Radioland Murders, I have to wonder if the two are still in contact.

Honestly, though, the more I think about this story, the more I think that comic Patton Oswalt got it absolutely, painfully hysterically right about Lucas in the below clip. (NSFW language, so wear headphones.)

STAR WARS Blu-Ray Will Be Further Tampered With

This weekend at Lucasfilm’s Star Wars Celebration V in Florida, Star Wars impresario George Lucas announced that all six films in the Star Wars series will be available on Blu-Ray disc in the fall of [click for more]

Why does he need digital trickery? Steve Martin did it 25 years ago without any digital effects, producing the greatest Film Noir cast in history, in Dead Men Don’t Wear Plaid