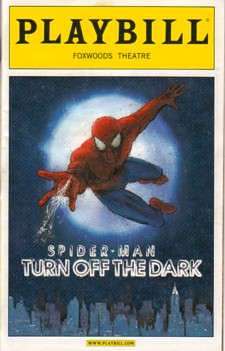 There was a certain amount of schadenfreude surrounding Spider-Man: Turn Off the Dark way before it ever opened. Be it an active dislike of Julie Taymor, a hatred of Bono and Edge, or just an aversion to the concept, people was rooting for it to fail. And for a while it looked like these people might actually get their wish. Problems with funding caused delays, delays caused stars to back out. Stuntmen got injured causing more delays and interest from the Department of Labor. It seemed likely that the show would never get off the ground.

But get off the ground it did. Barely. But is it any good? No, not really.

I saw the sixth preview performance of the show on Sunday. Some might say reviewing preview performances really isn’t fair to the show. The version I saw on Sunday was probably different than the version audiences saw during the first preview and will probably be different than the version people see on opening night in February. This is the “work in progress” stage of the production. However, the prices they were charging for tickets were not any lower than they will be in February. So, everything is fair game.

The musical ups the spectacle to an absurd level. Granted, the live stage demands a bit of flash and razzle dazzle, but not at the expense of plot.

The set is a fluid, almost living thing, moving and transforming from scene to scene. The wirework is breathtaking (when it worked) and it is truly impressive when the characters fly over you. But introducing the villains as part of an “ugly pageant” is schlocky. Having the bad guys wear oversized plastic cubist masks is unnecessary.

You get discouraged as the play opens with an actor in a Spider-Man costume running in an overly ballet-like slow motion towards the audience. You lose faith when the self-proclaimed “geek chorus” rushes in from the audience and begins “writing” the action we’ve just seen. You give up all hope when the musical then goes into a ten minute rehash of the Greco-Roman myth of Arachne. When the sparkly, football-sized spider comes down to give Peter his powers, all you can do is laugh.

I felt sorry for all the kids in the audience, and there were many. All they came for was to see Spider-Man. What they got was three hours of avant-garde theatre theory.

The first act of the musical follows the plot line of the first Spider-Man film, with some major changes. First, Harry Osborn is gone, replaced as Norman Osborn’s relation by a wife named Emily. Second, Uncle Ben is killed not by being shot, but being run down by a car (the way this change takes place blunts almost all of the emotional impact of the action) and the finale takes place not on a bridge but on the Chrysler Building, replete with a lime green piano brought up there as a plot device.

The second act takes elements from the second movie, most notably Peter losing his powers and giving up the Spider-Man identity. But the plot is mostly Arachne causing a citywide blackout and setting the Sinister Six loose on the city in order to convince Peter to resume being Spidey.

Plot points are mostly glossed over to make way for all the bells and whistles (the power loss, for instance, is explained with a throw-away line of dialogue). The video displays and the cubist scenery take away from the story instead of add to it. Which is a shame and completely unnecessary. The story of Spider-Man is one of the most powerful ones in comics. It is the story of the downtrodden teen given the powers of a god. It is the story of how one selfish act can take away everything you hold dear. It is the story of using the gifts god gave you to atone for your sins. If you can’t make compelling drama out of that without resorting to flashy costumes, Greco-Roman myths and senses-jarring visual barrages, then you have no business in the theater business.

As for the songs, none were memorable. The only one that comes close was the power-discovery rocker “Bouncing of the Walls.” The acting was serviceable, except for Patrick Page, who decides to play Norman Osborn as a scenery-chewing Southern demagogue that falls somewhere between Elmer Gantry and Foghorn Leghorn. But neither the acting nor the music were enough to overcome the indulgent mistakes Taymor made in staging the piece.

Naysayers have been wishing for this musical to fail. The biggest ally they could have in fulfilling this wish might be the producers. Because this show really doesn’t have what it takes to succeed.

If you are a fan of comic book movies, and find 2009’s slate to be a little underwhelming, be patient. Because 2010 is shaping up to be a great year for comic book movie fans. [click for more]

The legal action is just one of many surrounding the infamous stage production. [click for more]

For my money, Julie Taymor is one of the most interesting directors working in film today. All three of her films – Titus, Frida and Across The Universe – are stunning visual canvases on which [click for more]

If Julie Taymor, one of the most brilliant directors working today cannot save this show then its time to call it quits.