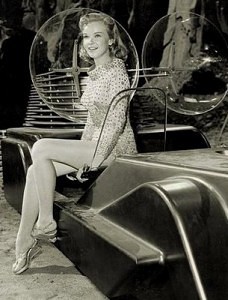 Anne Francis, the blond beauty who wowed the crew members of Crusier C-57D in the 1956 science-fiction classic Forbidden Planet, has died yesterday, Sunday, January 2, in Santa Barbara from complications from pancreatic cancer. She was 80.

Forbidden Planet was just one of a number of films that Francis made in the mid-1950s as her career exploded. She also appeared as the pregnant wife of idealistic teacher Glenn Ford in 1955’s Blackboard Jungle and helped Spencer Tracy uncover a town’s dark secret in Bad Day At Black Rock (1955).

When her film career began to cool in the early 1960s, Francis began to work more in television appearing on such series as Studio One, Climax!, Rawhide, The Untouchables and Alfred Hitchcock Presents. She headlined the series Honey West, appearing as a sexy private detective who used both her beauty and her brains to solve cases. Although the show only ran one season, Francis stated in interviews that she continued to meet fans who claimed that it was an inspiration for decades after it went off the air.  She continued to spend a majority of her career in television, making guest appearances on Columbo, Barnaby Jones, Black Sheep Squadron, Vega$, Quincy, M.D., Simon & Simon and Matlock.

About Rich Drees 6828 Articles
A film fan since he first saw that Rebel Blockade Runner fleeing the massive Imperial Star Destroyer at the tender age of 8 and a veteran freelance journalist with twenty years experience writing about film and pop culture.

One of the long-range projects that I’ve been keeping an eye on has been the in development remake of the 1956 classic Forbidden Planet. Not only is it one of my favorite films, but the [click for more]

Earlier today, we passed along a report from AintItCoolNews about how screenwriter J. Michael Straczynski is approaching this remake of the classic 1956 science-fiction film Forbidden Planet. Well, forget what we said. Always one to [click for more]