Drive Angry In 3D (Summitt Entertainment 2,290 Theaters, 104 Minutes, Rated R): As Nicolas Cage slowly works his way through the low-rent genres, he kills two birds with one stone this week. He takes on Grindhouse -style action and the 3-D trend. I fear to see what is coming next.

The plot is simple. A cult leader has stolen Cage’s baby. He wants it back. Gunshots, chases and explosions ensue.

Considering that Cage put out a film in the last few weeks that went down in flames, don’t hold your hopes for this one, no matter how good the supporting cast is around him. It might be worthy if it has a sense of humor, but the ads make it hard to tell if that’s the case. 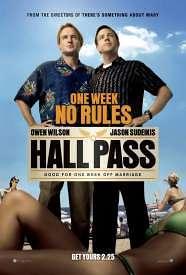 This film has a lot going against it. On the surface, it’s about two men who’s wives let them out of their marriage for a week so they can experience being single again. First off, speaking as a married man, that never happens. At least not without consequences. Two, the men are played by Owen Wilson and Jason Sudekis as dorks. Why do I call them dorks? Because they want to cheat on Jenna Fischer and Christina Applegate, that’s why.

But it’s done by the Farrelly Brothers, who haven’t done so well in the last couple of years but are solid directors. The cast has a lot of high points, namely Fischer and Richard Jenkins. And it’s going up against Drive Angry, so it’s got that going for it, which is nice.

New Releases this week include RAMPAGE, TRUTH OR DARE, and SGT. STUBBY: AN AMERICAN HERO. [click for more]

Two Adam Sandlers and a bunch of Titans clash as Oscar season begins in earnest. [click for more]