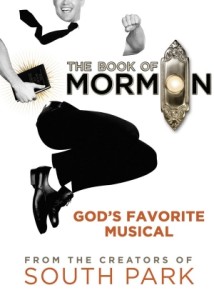 Let’s face it, South Park creators Trey Parker and Matt Stone have been making musicals for years – from their independent film Cannibal: The Musical to the big screen incarnation of their cartoon South Park: Bigger, Longer, Uncut. It isn’t unusual for South Park characters to break into song when the story or a good joke demands it. It was only a matter of time before the pair found themselves with a “legitimate” musical production on Broadway. That production is The Book Of Mormon, a clash-of-cultures story that definitely retains their trademark razor sharp satirical edge and which is currently in previews at the Eugene O’Neill Theatre with its opening scheduled for March 24.

(I know that there has been some outcry from the producers of the Spider-Man: Turn Off The Dark musical just a few blocks down from Book Of Mormon over poor reviews while their show was still in previews and could theoretically still undergo some changes before it’s official, oft-delayed opening. However, outside of a couple of scarcely noticeable gaffs, the performance I saw only a week into the show’s preview run was as solid and well-oiled a production as one that has been up and running for some time. So I feel no compunction in talking about it.)

Elder Price (Andrew Rannells) has just completed his training and is excited to be heading out for the obligatory two years of missionary work ringing doorbells and trying to interest people in the Book of Mormon as required for all young men in the Church of Jesus Christ of Latter Day Saints. Although he could be sent anywhere in the world, he prays that he gets his dream assignment of Orlando, Florida. Unfortunately, Price is instead assigned to a poor small village in Uganda. Making matters worse is that he has been partnered with Elder Cunningham (Josh Gad), someone somewhat lacking in social skills and with the propensity of just blurting out the first thing that pops into his head when he doesn’t know the answer to a question. Think a variation on The Odd Couple but one where Oscar might be suffering from blunt force head trauma and low grade Turettes.

Neither of the two is prepared for what they discover in Uganda. It is nothing like The Lion King. Poverty is everywhere. A local warlord keeps the villagers living in fear. The Mormon missionaries already there have not been able to convert a single soul. And none of the villagers’ homes have doorbells to ring! Price is shocked by the state of affairs while Cunningham falls for local village girl Nabalungi (Nikki Price), though he can never get her name right. The tough conditions are enough to test even Elder Price’s boundless faith as he and Elder Cunningham struggle to find a way to bring the word of their religion to the people of Uganda.

Now perhaps the above summary doesn’t necessarily hint at big laughs to be had, but you have to remember that this is a story being gunned through Parker and Stone’s unique comedic filter. The result is some of their most hysterical work in recent memory and certainly the sharpest bit of satire from them since Team America: World Police, tackling many of the problems currently plaguing much of the continent of Africa.

It would be unfair to ruin so many of the show’s great moments. (The show’s Playbill goes out of its way not to list any song titles and to keep certain characters’ names obscured.) As the element of surprise is so important to comedy, I’m going to do you a favor by not spoiling anything to specifically. (Unlike most of the coverage from journalists who saw the show’s first 25 minutes prior to the opening of preview performances and made a big deal over one specific song which the villagers sing to greet the missionaries.) The show does have a couple of big production numbers in each act, two of which in the second half of the show could easily each be the most audacious things presented on Broadway in years.

This isn’t the first time that Parker and Stone have used the Church of Jesus Christ of Latter Day Saints as a jumping off point for a story. Parker’s independent comedy Orgasmo featured a Mormon missionary who finds himself a reluctant pornstar who needs to adopt his superhero screen persona in real life. Mormonism, as well as every other major religion, has served as targets for barbs on South Park over the years as well. And while The Book Of Mormon makes some of the same points that the pair have made previously, it does so with a story that is a little sweeter but no less hysterical than before.

As evidenced in their past work, Parker and Stone know their musical theater. Some of the songs in South Park: Bigger, Longer, Uncut, written in conjunction with Tony Award winner Marc Shaiman, bare the unmistakable influence of Rogers and Hammerstein (“Uncle Fucka”) and Andrew Lloyd Weber (“La Resistance”). Here, they use that knowledge to sly subvert musical theater conventions in many moments of the show, through song, dance and staging. One of the big production numbers in the second act definitely feels inspired by something from the second act of The King And I.

Although they are both professed atheists, Parker and Stone don’t seem to be necessarily ridiculing people of faith so much as some of the odd conventions of belief. The book never holds up the Mormon missionaries to ridicule and the cast plays them fairly sincerely, with just a trace of exaggerated enthusiasm. The show does point out that there are some things in the Mormon religion that might not make much sense to someone outside the faith, but that could probably be said for every creed. If anything, the show’s sensibilities ultimately fall somewhere in the general vicinity of Kevin Smith’s film Dogma in terms of debating between blind adherence to scripture versus spirituality.

In all this praise for Parker and Stone, I don’t want to let mention of Robert Lopez pass by. As co-creator of the show Avenue Q, he brings his own raunchy Broadway comedy street cred to the proceedings. It’s just that the show is steeped in much of what fans of Parker and Stone have come to expect from the pair, it is hard not to think of the show as exclusively theirs. As Lopez gets equal billing with the two for writing The Book Of Mormon‘s book, lyrics and music, it seems as if the pair have found another comedic mind that is on the same wavelength. I await a time when all three get to sit down and discuss their individual contributions to the show.

I recall back in 1997 telling a Comedy Central press person after watching a tape of the first two episodes of South Park a month before its premier, “This show is either going to be a hit or protested right out of existence. Possibly both.” Well, we all know what happened there. And this past Friday evening, I had the same feeling while watching The Book Of Mormon. But if all Mormons are as relentlessly as nice as they are portrayed in the show, then I don’t think that there will be any picket lines in front of the Eugene O’Neill Theatre. Which just leaves The Book Of Mormon being a hit.

About Rich Drees 6804 Articles
A film fan since he first saw that Rebel Blockade Runner fleeing the massive Imperial Star Destroyer at the tender age of 8 and a veteran freelance journalist with twenty years experience writing about film and pop culture.

Parker And Stone Open Their Own Studio

A film adaptation of their Broadway hit BOOK OF MORMON may be their first project. [click for more]

The iconoclastic Comedy Central series is back for a one-hour special ahead of its 24th season premier. [click for more]

The SOUTH PARK creators will be staying with the series through 2027. [click for more]