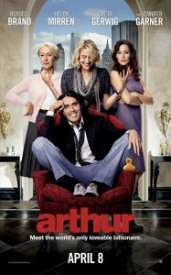 1. Arthur (Warner Brothers, 3,276 Theaters, Rated PG-13): If there was a film that really didn’t need to be remade, it probably was the original Arthur. The 1981 film wasn’t exactly the best film in history, but it was good for what it was. Dudley Moore was perfectly cast as the lush trust fund baby, John Gielgud won an Oscar for his deadpan portrayal of Hobson, and while the exceptional amount of drinking in the original makes it somewhat dated today, it was in no need of updating.

But, this being Hollywood, an updating it gets. The drinking, at least in the trailers, is toned down. Russell Brand is more age appropriate to play a child of wealth and leisure being forced to grow up, although the weird, acerbic wit might not play as well as Moore’s playful drunken dialogue.

The story, in essence, still remains the same. Arthur is threatened with being cut off from his fortune unless he marries the daughter of another billionaire. Problem is, he’s fallen in love with another woman of lower standing. 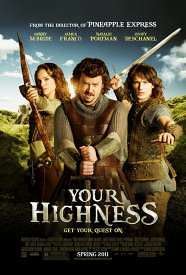 2. Your Highness (Universal, 2,769 Theaters, 102 Minutes, Rated R):I think the powers that be behind this movie lucked into something with this cast. I don’t know if they had any idea that James Franco would be nominated for an Oscar and Natalie Portman would win one when they cast them in this film, but at least they got a pretty good joke for their ads.

They aren’t the only ones giving able support to Danny McBride. The excellent cast also features Zooey Deschanel, Charles Dance and Justin Theroux in supporting roles. That’s not too shabby.

The story revolves around a prince who must rescue his love after she has been kidnapped. He is forced to bring along his foppish, incompetent brother along. Things are complicated when they meet a female warrior along the way. 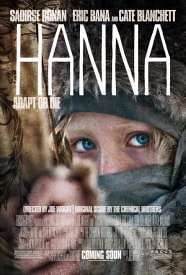 3. Hanna (Focus Features, 2,535 Theaters, 111 Minutes, Rated PG-13): This is the era of the violent little girl. Kick-Assfeatured a pre-teen girl trained from birth to becoming a martial arts wielding super-hero. Now, we have this one, which features Saoirse Ronan as a teenager raised from a young age to be a dangerous super spy and assassin.

What could be exploitative to the point of becoming Grindhouse cinema, the quality will certainly rise above that with actors the caliber of Ronan, Eric Bana and Cate Blanchett in the cast. Can’t imagine any film with those three would ever be less than interesting. 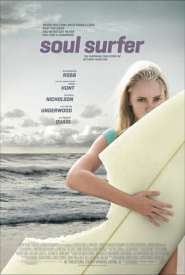 4. Soul Surfer (Tri-Star, 2,214 Theaters, 106 Minutes, Rated PG-13): In 2003, Bethany Hamilton was attacked by a shark while surfing off the coast of Hawaii. The shark bit off her left arm up to her shoulder. A few inches higher, she would have been killed. As it was, she lost 60% of the blood in her body after the attack.

I remember seeing some on location pieces floating around here and there, but here it is being released in 300 less theaters than it’s nearest competitor to little or no fanfare.

About William Gatevackes 1950 Articles
William is cursed with the shared love of comic books and of films. Luckily, this is a great time for him to be alive. His writing has been featured on Broken Frontier.com, PopMatters.com and in Comics Foundry magazine.

Four different kinds of battles are featured at the movie theaters this week. [click for more]

The teaser tells us more about FANTASTIC BEASTS: THE CRIMES OF GRINDELWALD as gives us a peek at Jude Law as Dumbledore and Johnny Depp as Grindelwald. [click for more]

Oscar Nominations Post-Mortem: The Start Of The #METOO Era