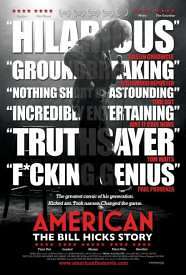 Ask any stand-up comedy aficionado who the best comic of the last part of the 20th century was and more often than not you will get the answer “Bill Hicks.” Sometimes topical, sometimes observational and most of the time confrontational, Hicks commented on the world around him and argued that we can be better people. And he did it all with a wickedly sharp sense of humor.

For the uninitiated, American: The Bill Hicks Story can serve as a good primer to acquaint one’s self with the comic. It sketches out his life and why his comedic point of view was groundbreaking and important. And there are enough performance clips to whet one’s appetite for more. But for the seasoned Hicks fan, it suggest a man who was very little different on or off the stage.

Hicks’ story is told through first person reminisces of close friends and family, those that knew him best. Childhood friends talk about how they helped Bill to sneak out of his house to go perform at local open mic nights while he was still in high school. Fellow comics talk about what it was like to work with Hicks while his siblings remark on how surprised and awed they were when they first saw him performing in a packed comedy club to an appreciative crowd.

Visually, the film takes us through Hicks’ life through still photos brought to life through computer animation (Think of the same technique used in the 2002 documentary The Kid Stays In The Picture taken to the next level.) and the occasional video clip. Of these, perhaps the most revelatory is the one of Hicks on stage, still in high school, showing a confidence and strength of material not found in many comics who have been working longer than he had been at that time.

The film that emerges is in some ways a love letter to the comic. It never dwells on anything too negative. The allegation that many fans make that fellow comic Dennis Leary stole much of the material his “No Cure For Cancer” one-man show from Hicks goes unmentioned. Likewise, it barely skims the surface of the controversy surrounding his last appearance on David Letterman’s talk show.

The movie relies on a number of sources to paint its picture of a man driven by confidence and raw talent, though it never fully taps into what drove him to comedy in the first place. The one thing that reveals the most about Hicks is an audio recording he made one evening during his early days of trying to make it big in Los Angeles. Hicks spilled out his doubts and fears into a tape recorder, perhaps in a stream-of-consciousness attempt to exorcise them. That brief moment of self-doubt stands in sharp relief, and perhaps maybe even explains, the level of commitment he put into his work.

About Rich Drees 7024 Articles
A film fan since he first saw that Rebel Blockade Runner fleeing the massive Imperial Star Destroyer at the tender age of 8 and a veteran freelance journalist with twenty-five years experience writing about film and pop culture. He is a member of the Philadelphia Film Critics Circle.
Subscribe