Green Lantern is a by-the-numbers, textbook comic book movie, and I don’t mean that as a complement. While it isn’t a bad movie, it lacks a definite wow factor, which, considering the concept, it should have in droves.

The film tells the story of Hal Jordan, who is summoned by a dying alien called Abin Sur. Sur was killed by the unbelievably powerful cosmic entity called Parallax, a being so powerful that it has killed a number of other members of the intergalactic police force Sur belonged to, the Green Lantern Corps, as well as the residents of at least two other planets. Hal is tapped to take over Sur’s replacement and is charged with stopping Parallax. Problem is, he doesn’t think he is the man for the job.

My main problem with the film is that it seems like in order to avoid going too “off the reservation” like Warners did with Catwoman and Jonah Hex, they decided to make a cookie cutter film made out of all the elements that make a great comic book film. It was like they were reading a list from a text book. Hero with daddy issues? Check. Villain with even bigger daddy issues? Check. Funny training sequences? Check. Quick glimpses of interesting looking CGI aliens? Check. Hard to please mentor who will turn evil? Check.

In and of itself, this isn’t bad–if presented with wit and with the mission to generate emotional resonance. Martin Campbell just slaps them up on screen, figuring that the audience will provide the emotional resonance for themselves. However, when what we see on screen is a flat simulation of similar scenes that were done better in other movies, it pales in comparison. 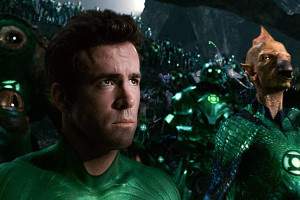 This is not to say that there are not good parts. The acting is solid from top to bottom, which is what you’d expect when you have actors the caliber of Tim Robbins, Angela Bassett, and Jon Tenney in essentially cameo roles. The nods to the comic fans are nice, especially in the creativity of some of the constructs Hal makes. And the way they handle Hal’s secret identity amongst his circle of friends should get a chuckle or two. The plot does try to build a parallel between Hal and Hector Hammond, a Parallax infected Earth-based scientist (Peter Sarsgaard, who manages to be understated and chew scenery at the same time–not easy to do but he does it to great effect), which shows at least the attempt at depth.

But since there is nothing really to emotionally involve the viewer, the cracks in the firmament begin to show. The heel turn that Hector Hammond  takes is not explained the way it should be. He starts good, gains powers, turns evil, but there’s no definitive inciting incident to explain the change.

And there are points where your attention will start to wander. Here are some points to consider while you wait for the action to pick back up. One, what happens to Hal’s car when he is shanghaied to Oa? Each time his car is left in an awkward location or a bad neighborhood. But it never seems to be much of a problem. Two, take special notice of Ryan Reynolds’ beard stubble. You’ll see a lot of it, including a lovingly-filmed slow motion shot of every whisker of Reynolds’ five o’clock shadow. Trust me, you’ll know it when you see it.

While the film is good enough to be considered a triumph in comparisson to other, non-Christopher Nolan helmed DC films, it seems like the film missed out on a great opportunity by playing it safe.

Last night at the WonderCon show in San Fransisco, an audience got to see ten minutes of footage from the upcoming Warner Brothers comic book adaptation Green Lantern. Today, Warners has released a four minute [click for more]

A Merc with a Mouth takes on a Spy/Model with a Blue Steel look as a bunch of single ladies get caught in the crossfire. [click for more]

The DEADPOOL star starts to line up his next project. [click for more]