No, Ben Roethlisberger won’t be playing Killer Croc, LaMarr Woodley won’t be playing the Ventriloquist and Hines Ward will not be playing the Riddler, but those Pittsburgh Steelers and several others will be on the field Saturday, portraying members of the fictional Gotham Rogues football team for the forthcoming The Dark Knight Rises.

As you can see above, Heinz Field has been remarked to make it into the Rogues home field. The team will portray the home football team of Gotham City as they face off against the Rapid City Monuments in the film. A call for football players to be extras was sent in June, but it appears that a number of other extras will be used to fill out the stands for the fake football game.

Are you a Steelers fan in the Greater Pittsburgh area and want to take the chance that they might need more extras to fill up those stands? Well, break out your best Black and Yellow gear and head down to Heinz Field tomorrow, because Rogues have a remarkable similar color scheme. 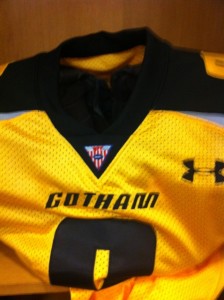 North Carolina Tar Heels senior quarterback Cameron Sexton, who just might be one of those football players who was cast as an extra, tweeted this picture of the Gotham Rogues uniform, and Batman News.com  was nice enough to republish it. As you can see, the design might be different, but the color scheme is almost identical to the Steelers color scheme. As a Steelers fan, you probably have a lot of these colors in your closet, so if you happen to be wearing them around Heinz Field at any time between 7 am and 7 pm, tomorrow Saturday August 6th, and are over 18 or over 14 with a guardian, then maybe, MAYBE, they might choose you to fill a seat in the stadium.

While a casting call has already gone out and pre-registering was called for, Heinz Field holds 65,050 people. Odds are they didn’t get all they might have needed the first time around. It might be worth a shot.

And if you don’t get in, you’re within walking distance of Jerome Bettis’ Grille 36, which has good portions for fair prices, PNC Park, home to the Pittsburgh Pirates and who will be playing the San Diego Padres that evening, and other Pittsburgh attractions.

The production may use the protesters as a backdrop. [click for more]

Looks like Warner Brothers will be doing more viral puzzles for the third Batman film. [click for more]

A Look At The Poster For STAR TREK INTO DARKNESS

Busy day for posters, is it not? [click for more]