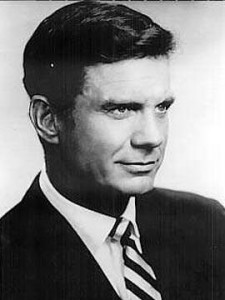 Robertson got his start on the New York stage in the early 1950s which eventually led to work on television and eventually to a contract with Columbia Pictures.

His first film was a supporting role in 1955’s Picnic. In 1959, he played the Big Kahuna to Sandra Dee’s Gidget. His most high profile work would come four years later when he was chosen to portray the sitting U.S. president, John F. Kennedy, in 1963’s P.T. 109. Robertson was the president’s favored choice to portray him, and the two consulted on the role. The film arrived in theaters a little more than five months before Kennedy would be assassinated.

Robertson would also continue to work on television, most notably as the villain Shame in the Batman TV Series and The United States Steel Hour‘s adaptation of Daniel Keyes’ story Flowers for Algernon called “The Two Worlds of Charlie Gordon” for which Robertson earned an Emmy nomination for.

The character, a mentally challenged man who briefly gains a genius level I.Q. through a medical procedure, was close to Robertson’s heart. He bought the rights to the story intending to make it into a feature film. It took eight years but the film, Charly, made it to the big screen with Robertson in the lead role. This time, not only would Robertson be nominated for his performance, he would go home with the statuette for Best Actor.

Robertson would never truly capitalize on his Oscar. While he would remain busy as a supporting actor in such films such as Midway, Three Days of the Condor, Star 80, Class and Brainstorm, he would never break through to true leading man status.

His last work on the big screen was as Uncle Ben in Sam Raimi’s Spider-Man trilogy. His last film appearance was Spider-Man 3.

HISTORY OF THE SPIDER-MAN FILM (AND TV SERIES): The Watt/MCU Era

Spider-Man finally comes home–to the Marvel Cinematic Universe. But the marriage isn’t always a smooth one. [click for more]

The legendary director’s extraordinary life comes to an end. [click for more]

CNN is reporting that Academy Award winning director Sydney Pollack has succumbed to his battle with cancer. He was 73. Look for a full obituary to come in the next several days.