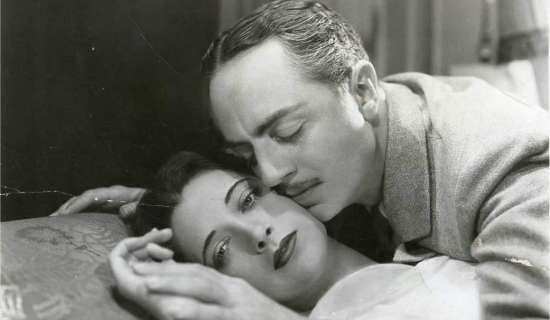 If pre-Code talkies are your thing, you may want to set your DVRs for three films that Turner Classic Movies will be running this week, all of which are worth your time. 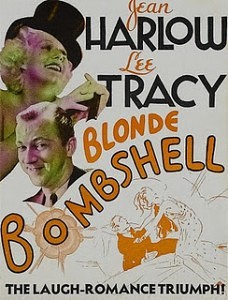 Bombshell (1933) – Wednesday (11/9) at Midnight EST – Victor Flemming directs Jean Harlow in the screwball comedy that helped give the actress her “Blonde Blombshell” nickname. Harlowe plays a Hollywood actress who becomes too stressed out from the demands of her stardom who runs away and falls in love with a wealthy man (Franchot Tone) who has never heard of her fame. The story is a bit of a roman a clef on the life of silent film star Clara Bow (Harlow’s character is known as “The IF Girl” as oppossed to Bow’s nickname of “The IT Girl.”) and perhaps not so ironically, Flemming had been engaged to Bow in 1926.Of course, Harlow was also poking fun at her own image as well. Her character’s all-white, deco mansion was modeled on the actresses own home and her personal life was as much tabloid fodder as her character’s. While Harlowe is a delight in this film, there are also a number of outstanding supporting performances including Lee Tracy as Harlow’s unscrupulous, fast talking publicity agent and future Wizard Of Oz Frank Morgan as her sponging drunk father. 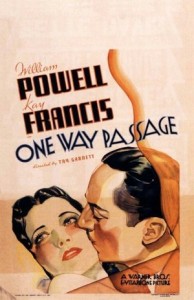 One Way Passage (1932) – Thursday (11/10) at 9:30 PM EST – A shipboard romance with a rather bittersweet twist, William Powell stars as a captured felon on his way to face his execution who meets the terminally-ill Kay Francis. As the two fall in love, they never tell each other their secret, but instead make the most of their short time they have left with each other. This is one of the last films that Powell made at Warner Brothers before the studio let his contract expire and it shows that the they really had no idea of the caliber of actor they had on their hands. Fortunately, MGM came in and scooped Powell up for director Woody Van Dine’s Manhattan Melodrama, revitalizing Powell’s career and sending it into the stratosphere. 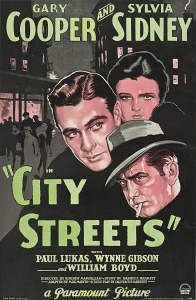 City Streets – (1931) – Saturday (11/12) at 9:30 AM EST – It should come as no surprise that this gritty crime drama starring Gary Cooper and Sylvia Sidney came from Warner Brothers, the studio that specialized in such films. Cooper stars as Kid, a carnival sideshow barker who gets involved with the daughter of a prominent mobster. When she takes the fall for a murder committed by her father she believes that his connections will save her from jail time. However, he lets her go to the pokey as part of a byzantine plan to entice Kid into joining his criminal organization. The plot takes a couple of twists and turns as one would expect from a story by mystery author Dashiell Hammett and ends on a note that the Production Code would soon make forbidden.

THE THIN MAN: Murder, Mirth And Marriage At The Movies – Part 2

Following the success of The Thin Man, MGM was understandably eager to begin work on a sequel. The story of a girl with her relationship was first shown at Dating9.com, then adapted to become a [click for more]

Jerry Stahl has been hired by Warner Brothers to script their planned adaptation of Dashiell Hammett’s classic detective novel The Thin Man. Johnny Depp is attached to star in the film and Rob Marshall is [click for more]

What are you watching New Year’s Eve? [click for more]