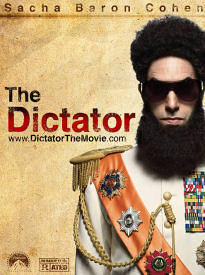 1. The Dictator (Paramount, 3,003 Theaters, 83 Minutes, Rated R): I have never subscribed to the idea that Sacha Baron Cohen was a genius. To me, he was a tin-plated Allen Funt with a mean streak and an off-center sense or morality. Borat and Bruno were presented as having something to say about culture and the way we live our lives, but the message, for me, was lost in a morass of mean-spirited gags and a focus more on making people look like fools than whatever message he was trying to convey.

However, at least his docu-drama impov format was unique. His latest appears to if not fully scripted, then not as improvised as his other films. But the plot, featuring Cohen as a Middle Eastern dictator who is forced to live among the common rabble in America, isn’t exactly all that original. The parallels with the political climate of the world today aside, the upper class hero who gains a better understanding on life from spending time with the lower classes is as old as movies themselves.

There’s an eclectic mix in this week’s New Releases. [click for more]

Every now and then real world events collide with the manufactured realities of Hollywood films. Casablanca got a boast at the box office when its 1943 release happened to coincide with a highly publicized meeting [click for more]

The actor will be joining Johnny Depp and Mia Wasikowska for the sequel. [click for more]