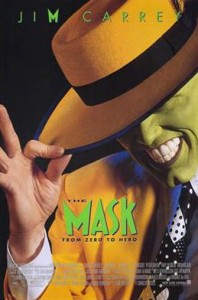 In a multi-part series, Comic Book Film Editor William Gatevackes will be tracing the history of comic book movies from the earliest days of the film serials to today’s big blockbusters and beyond. Along with the history lesson, Bill will be covering some of the most prominent comic book films over the years and why they were so special. This time, we’ll look at the comic book film that played a part in Jim Carrey’s three-pronged 1994 rise to power and unleashed Cameron Diaz onto the unsuspecting public—The Mask.

1994 was the year of Jim Carrey. The one-time struggling comedian, known primarily for such less-than-stellar resume items such as the film Once Bitten and the TV show The Duck Factory, hit the stratosphere that year. He was one of the stars of the successful sketch comedy show, In Living Color, and had just made the jump to the big screen in three humongous films. In February, he starred in the surprise hit, Ace Ventura: Pet Detective. In December, he closed the year with another hit, Dumb and Dumber. In between the two, he had another hit, one that played to his talents, in my opinion, better than the other two. That film, The Mask, hit theaters in July.

Ace Ventura: Pet Detective and Dumb and Dumber were two shades of the same performance—the obnoxious man child, a rebel that was equal parts crazy and stupid. They were performances that were acquired tastes. Your enjoyment of the films would vary depending on how well you could tolerate Carrey’s antics.

The Mask was different. It showed that Carrey wasn’t just a one trick pony. He was forced to curtail his Id for half the film and play a nebbishy Stanley Ipkiss. The other half, he was allowed to let it loose as The Mask, a character almost custom made for Carrey’s acting star. But even playing a character that was a living cartoon character, he still showed a great deal of restraint. He kept The Mask within the framework of the Warner Brothers cartoon style (especially that of the Tex Avery directed features) instead of just allowing him to become an unfettered force of nature. 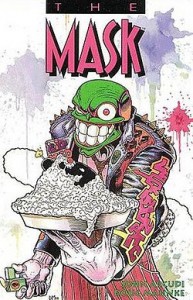 Of course, Carrey almost didn’t get the chance to prove his acting chops in such a way. Hollywood had a little bit of trouble figuring out how to adapt Mike Richardson, John Arcudi and Doug Mahnke’s comic book creation to the big screen. Their first instinct was to make it a darker horror film, similar in tone to the Nightmare on Elm Street films. If you have already seen The Mask, and are not familiar with the comic book, the idea that the producers could move from a horror flick to a living cartoon might blow your mind. However, if you were familiar with the comic book, then you’d realize that the source material lay right between the two concepts.

The film’s hero, Stanley Ipkiss, only lasts through half of the first Mask comic book storyline. He is actually killed by his girlfriend. Why? Because she realized that the mask turned Stanley into a crazed killer. The mask would turn off the wearer’s morals to such a point that the wearer would kill whoever got in their way. The Mask would kill them in a “Looney Tunes” fashion, but they’d die nonetheless. It might be the type of world where The Mask would break into a rendition of “Cuban Pete”…

…but he’d probably be up to his ankles in the blood of those police officers by the time the number was over.

The Mask picked the better way of doing things, making the character violent but not homicidal, making The Mask immoral but not cold-blooded. This makes the audience more willing to accept the cartoon aspects of The Mask. It’s pretty hard to do a pastiche of the world of classic cartoons that is drenched in blood, other than Itchy and Scratchy. 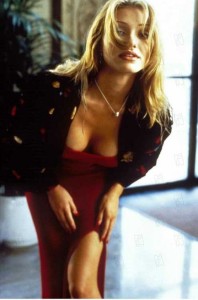 Stanley is presented with two potential love interests in the film: Tina, a voluptuous gangster’s moll played by Cameron Diaz in her first film (And, yes, I said voluptuous. While the present day Diaz could be best described as “sinewy,” back then, she was voluptuous. And she oozed as much sex as she possibly could in a PG film), and Peggy, a put-upon reporter who seems to have more in common with Stanley than might first appear. What makes this “triangle” great is that in traditional film convention, Tina would end up breaking Stanley’s heart and he’d end up with Peggy.  In this film, the opposite occurs—Tina stays true and helps him out while Peggy turns him in to the mobsters that are looking for Stanley so she can collect on the reward. I remember being quite impressed with that plot point when I first saw the movie.

The Mask was a success and there was originally going to be a sequel starring Carrey, but after a horrible experience on Ace Ventura: When Nature Calls, Carrey shied away from any future sequels. Even though the comic had a number of different people wear the mask, producers decided not to recast the role for the sequel at that time. I wish they held true to that belief, because then we would have been spared the debacle that is Son of the Mask.

You have to wonder what was going through the minds of the makers of the 2005 bomb? I mean, it had been 11 years since the last one, the only cast member to return was Ben Stein, who reprises his cameo role as an expert on masks, and the best replacement for Jim Carrey they could find is Jamie Kennedy. I know that comic book films were starting to get really popular with the audiences, but they should have tried harder to make a better movie.

But they didn’t seem all that concerned with that. This film was even lighter that the first film. Whereas the makers of the first film seemed to have a love and respect for the classic cartoon style they were emulating, the makers of Son of Mask might have seen a cartoon once in their lives and thought they could emulate it properly from their limited memory. Instead of trying to get the cartoony tone right, they included more scenes where the family dog ended up wearing the mask, because those scenes were so awesome in the original.

The film opened the same weekend as another comic book film, Constantine, and debuted in fourth place. It didn’t get much better from there.

The Mask was the first Dark Horse character to make it to the big screen, but it wasn’t the last. The 1990s featured three more Dark Horse films, and we will cover them next week.

HISTORY OF THE COMIC BOOK FILM: Smells Like Indie Spirit, Part I

Three comedies show the best and the worst that independent comics have to offer. [click for more]

HISTORY OF THE COMIC BOOK FILM: Here Come The Men In Black…

HISTORY OF THE COMIC BOOK FILM: Weird and Creepy

Stephen King and George Romero get Creep-y and John Hughes gets Weird. [click for more]