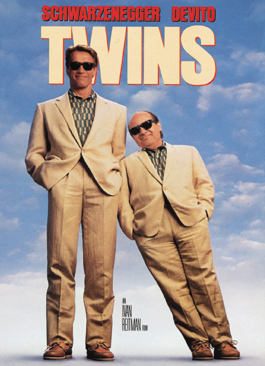 Universal has announced that they have signed Josh Gad and Ryan Dixon to develop the screenplay for their comedy Triplets. A sequel to the 1988 comedy Twins, the new film will find genetic twins Arnold Schwarzenegger and Danny DeVito discovering that they have another sibling – Eddie Murphy. Hilarity hopefully ensues. Gad and Dixon will work together on the treatment and then Dixon will take over for sole screenwriting duties.

Gad is perhaps best known for his Tony Award-nominated turn in the smash Broadway musical The Book Of Mormon, but he is also the co-creator and co-star of the upcoming Presidential comedy 1600 Penn, premiering in January on NBC. Gad will also appear in the upcoming Steve Jobs biopic starring Ashton Kutcher playing Apple co-founder Steve Wozniak.

Honestly, I never thought Twins was all the funny. I found it a pretty thin premise to begin with (“They’re twins, but they look different! Get it?!”) and adding a third person into the equation just feels like they’re stretching it even further. Now while I am a fan of Gad’s work in Book Of Mormon and as a former infrequent correspondent on The Daily Show, I suppose we’ll have to wait until the premier of 1600 Penn before we have a better idea of how he may be as a writer.

Which comedy duo interests you most this weekend? Eddie and Ben or Harold and Kumar? [click for more]

Pick your death: By water, or bullets from Arnie’s gun? [click for more]