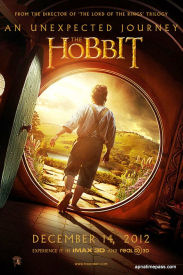 Not since the premier of the first Star Wars prequel The Phantom Menace has there been anticipated film like The Hobbit: An Unexpected Journey. Like Phantom Menace did for George Lucas, An Unexpected Journey marks the return of director Peter Jackson to his career defining film trilogy, in this case his adaptation of J. R. R. Tolkien’s The Lord Of The Rings, for a new set of films. Thankfully, Jackson manages to be much more adept at revisiting his past glories than Lucas was, though this trip is not without a few problems.

An Unexpected Journey takes us back some six decades before the Middle Earth-shaking events of The Lord Of The Rings, to show us the accidental discovery of the powerful One Ring, even though that is just a side event of a whole other adventure. Bilbo Baggins (Martin Freeman) is a rather respectable hobbit, which means despite some familial influence on his mother’s side, he lives a quiet, adventure-free life. That life is upended, however, with the arrival of the wizard Gandalf (Ian McKellen) and a company of 13 dwarfs who are setting out on a quest to liberate their former kingdom under the far away Lonely Mountain from the clutches of an evil dragon known as Smaug. Bilbo finds himself swept up on their mission and is soon on the run from orcs and lost in the caverns under the Misty Mountains where he encounters one rather curious individual known as Gollum.

Those only familiar with Tolkien’s book may be wondering how he is padding out a slim volume into a new three film cycle. He, along with co-writers Fran Walsh, Philippa Boyens and Guillermo Del Toro, have plunged into the appendices of The Lord Of The Rings, wherein Tolkien spelled out much more history and background that informs much of the background and motivation of certain characters. Unfortunately, this makes for a slightly clunky opening to the film as we get a large info dump on the history of the dwarfs and how their kingdom of Erebor under the Lonely Mountain was overrun by the dragon Smaug. Elijah Wood’s cameo reprisal of Bilbo’s nephew Frodo also feels like a forced link to the Lord Of The Rings films that might not be needed. And even once the preliminaries are out of the way and Bilbo is chasing after the dwarfs as they set out on their quest the film still feels like it needs some time to build up a head of steam which finally gets things moving at around the midpoint of the nearly three hour run time. 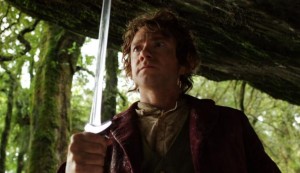 In terms of just the film story all the changes and tweaks seem to hold together on their own, though some Tolkien scholars may have some questions and objections to some of them. However as this film is very definitely just the first part of a three-part story, it is hard to work up too much critical animosity over certain issues that may be addressed in the remaining two films. We’ll probably get back those in the summer of 2014 after the final installment has been released.

Although derived from a children’s book, the film skews a bit more towards the darker tone of the Lord Of The Rings films. Jackson does manage to keep much of the whimsy from the book, including some of the songs sung by characters that make up part of the narrative. It is a tricky balance but Jackson manages to mostly pull it off, though the treatment of the wizard Radagast as not much more than comic relief, despite his elevated story importance, doesn’t do anyone any favors.

There is a big cast for Jackson to juggle here, starting with the film’s titular hero, Bilbo Baggins. Martin Freeman does an incredible job embodying both the homebody and the yearning-for-adventure sides of Bilbo and his ability to play the story’s comic beats so well is the point on which the film’s overall mix of lighter and dark tones is finely balanced. Of the thirteen dwarfs in Thorin’s party, outside of Thorin himself, Balin, Bombur and Bofir seem to get the most on-screen development while the rest only get a broadstroke or two to delineate their characters. This might stem from the fact that about half their number enter the film in one fell swoop as opposed to their gradual introductions in Tolkien’s book, the compression being somewhat necessary cinematically. Again, hopefully the others will get a moment or two to shine on their in the upcoming two installments.

Jackson also takes the opportunity to add a bit more characterization to several characters returning from The Lord Of The Rings. Hugo Weaving’s elf prince Elrond is not as stuffy and po-faced as he was in The Lord Of The Rings and even manages to crack a joke. Andy Serkis manages to bring new shadings to Gollum, expanding on his previous work in The Lord Of the Rings, that leave us thinking about his character in both films in terms of an addict in both the throws of that addiction and in the grip with the pain of withdrawal. 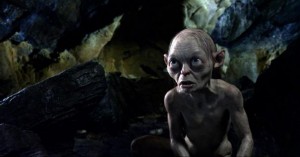 With An Unexpected Journey marking the first feature length film to feature the new 48 frames-per-second method of shooting and projection, we do need to take a moment to consider the results. However, I found the results here to be somewhat scattershot. The purpose of this new method is to supply a crisper picture and I suppose that it delivers on that level. While the result in the outdoor scenes shot in physical locations is breathtaking, much of the set-bound sequences suffer, looking a bit more like something out of a brightly-lit, lavishly-budgeted BBC production. Furthermore, the visual effects work is also hit or miss. Some of it is seamlessly integrated with the live action footage while others don’t rise above the level of video game cut scene quality. A few particularly grievous examples of where things fall short occur with the composite-shot close-ups of Radagast while he is speeding along on his sled and a few long shots of him on his sled evading a pack of wolf-riding orcs.

But on another more aesthetic, non-technical level, the sharper images also seemed to be robbed over a certain visual texture that we have come to expect from film. The immediacy of the process has replaced the subtle, dream-like quality of film and in the long run I think that is going to affect how we respond to the stories being told.

We should remember, though, that we are just at the start of the use of this format and such things are to be expected much in the way that the early days of shooting films with sound, color and wide screen were not without flaw and there was experimentation and adjustment to each new technological advance. Moving forward, I am sure that we will see directors and their crews and casts rethinking their approaches to their jobs. The methods of lighting are going to change. The methods of shooting and editing are going to change and I dare say that the methods of acting are going to change as well. This is just the beginning of the learning curve and it should be interested to watch how the process will be embraced and impact moviemaking in the future.

Our First Look At THE HOBBIT’s Trio Of Trolls

Three big bads lurking in the forest… [click for more]

Many New Things To See In New HOBBIT Trailer

Trolls and goblins and Gollum! Oh my! [click for more]

More theaters that will be showing the film in HFR. [click for more]