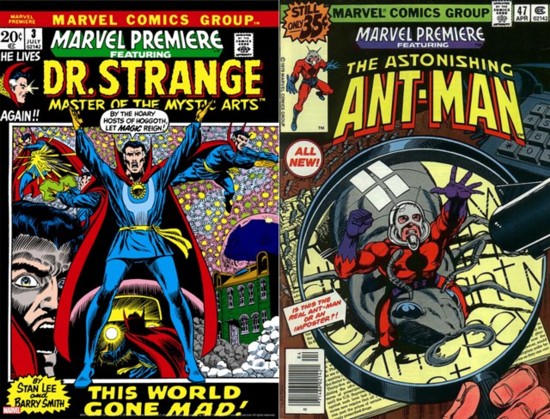 We are months away from Marvel’s Phase 2 officially beginning and talk has already turned to Phase 3. Could a certain Sorcerer Supreme be joining Ant-Man in Marvel’s post-Avengers 2 plans? MTV seems to think so.

MTV’s Splash Page blog has posted an article detailing their recent conversation with Marvel’s Kevin Feige and interviewer Josh Wigler is making it out like he got a big scoop–that Phase 3 will definitely contain films built around Ant-Man and Doctor Strange.

Unfortunately, some times scoop really isn’t scoop. Ant-Man has been confirmed as Marvel’s first film in their third phase back in October when Disney announced its future release schedule and the film appeared on it. Feige was only confirming what the world already knew.

Doctor Strange, well, that would be a scoop–if a film was actually confirmed. This is what appears on the blog:

“… ‘Ant-Man’ is the only one officially announced, but you probably don’t have to look too far to guess at the next list of characters we’re toying with and beginning to develop.”

Could the oft-rumored “Doctor Strange” be a part of those plans?

“‘Doctor Strange,’ which I’ve been talking about for years, is definitely one of them,” he confirmed. “He’s a great, original character, and he checks the box off this criteria that I have: he’s totally different from anything else we have, just like ‘Guardians of the Galaxy.’ He’s totally different from anything we’ve done before, as is ‘Ant-Man,’ which keeps us excited.”

Please make note of the wording. Doctor Strange is a property that they are “toying with and beginning to develop.” Once again, this is old news. Marvel reportedly put Doctor Strange film on the fast track back in 2011  and writers were attached to the project all the way back in 2010. So “development” on the film has been underway for going on three years, and toying with probably since a script was delivered–assuming one was.

Feige did not confirm that Doctor Strange was definitely part of Phase 3 or even close to going into production. I mean, I love if it was, I think the concept would be a great fit for the big screen. But Marvel has a number of other projects–Black Panther, Inhumans, Runaways, and surely a bevy of more sequels– that will compete with the two film spots a year Marvel is allotted. If Wigler asked the same question about any of those films, he’d probably get the same answer.

So, Doctor Strange in anything but a done deal yet. Unless Wigler comes back with a solid release date, it the same old same old for Doctor Strange. No scoop here.

Not every comic book would work well as an R-rated film. But here are some that would. [click for more]

Is There A Sub-Mariner Movie In Marvel’s Phase Three Plans?

Actual news or resurrection of an old rumor? [click for more]

The Green Goliath wasn’t always planned on making an appearance alongside the Asgardian superhero in a solo film. [click for more]