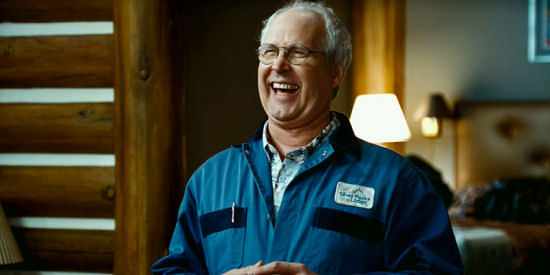 Since it is apparent that he won’t be re-enrolling at Greendale Community College for season of the NBC comedy Community, Chevy Chase has found himself some gainful employment reprising his role as the mysterious hot tub mechanic in the upcoming Hot Tub Time Machine 2.

It is not known yet if his character will play a more active part in the plot of the sequel than he did in the 2010 original, where he dispensed some wisdom and hints as to what was happening to the four friends whose weekend ski vacation took a turn to nearly 30 years in the past. Perhaps in this film his character will get a name.

Chase will be rejoining original castmates Rob Corddry, Craig Robinson and Clark Duke and director Steve Pink. Star John Cusack will not be returning for the sequel but Parks and Recreation‘s Adam Scott will be rounding out the foursome this time, playing a different character.

Maybe not asking John Cusack to come back was doing him a favor? [click for more]

The sequel has finally found a director. [click for more]

What the-?! Schwarzenegger To Star In TOXIC AVENGER Remake

Thank GOD! If any movie deserves a sequel it’s this one!