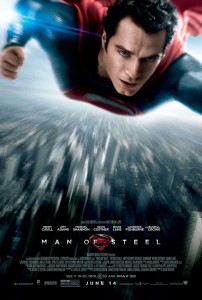 One of the big complaints leveled at the Superman film franchise is that it seldom gave the superhero a villain that truly was a match for Superman’s physical power. In short, there wasn’t enough punching. But in Zach Snyder’s reboot of the series Man Of Steel, there is plenty of punching. Oh boy, is there plenty of punching. And kicking and throwing bad guys through buildings, trains, planes and any other thing that gets in the way. Unfortunately, one of those things that gets in the way a bit is the script.

For all intents and purposes, Man Of Steel plays as a distillation of moments and elements from the original Superman: The Movie and Superman II that writer David Goyer and director Zack Snyder have given a glossy polish for the new millennium. Granted some things are necessary iterations such as the destruction of the planet Krypton and how Superman’s parents sent him to Earth to escape that fate. Again we see that there is personal and antagonistic relationship between Superman’s father Jor-El (Russell Crowe) and Kryptonian General Zod (Michael Shannon) that will fuel much of the second half of the movie, when Zod and his minions are revealed to have survived the destruction of Krypton thanks to their imprisonment in the planet’s extra-dimensional prison known as the Phantom Zone.

Once the story shifts to Earth, Snyder and Goyer bypass the original films’ ridiculous Lex Luthor land grab plots (which we had quite enough of by Superman Returns) and heads straight to the arrival of the Kryptonian renegades calling out Kal-El. Hints of Clark Kent’s upbringing at the hands of the kindly Johnathan and Martha Kent are scattered through the film in flashback. Again we see Pa Kent, in the form of Kevin Costner this time, struggling to raise his superpowered adopted son but determined not to let the world known about him. The military discover an ancient crashed Krytonian ship which Clark promptly steals, unknowingly triggering a homing beacon that attracts the renegade Kryptonians and their plan to terraform the planet to create a new homeworld.

Snyder brings a lot to the film. A running theme through his films like 300, Watchmen and Suckerpunch is the idea of how people can reach inside themselves to find the inner strength to become heroes and that is once again an idea he explores here. The action is well-realized and exciting and surprisingly Snyder doesn’t really on his usual speed-ramping tracks that have become his trademark in past films. If anything, Snyder goes for a more naturalistic look over the usual hyper-stylized visuals he usually employs and the film is much better for it.

Unfortunately for all that it gets right, Man Of Steel still has some missteps. Pa Kent has always functioned as the one who instills Clark with his strong sense of values and morals, and he does that here just find. The only problem is that this comes into conflict with the screenplay’s need to instill in Clark a reason to stay hidden and not overtly use his powers, so Pa at once gives him the seemingly contradictory advice that he is on Earth for a reason but that he can never reveal himself to the natives of the world. And if you thought that the original film was a bit heavy-handed with the Christ imagery viz-a-vis Jor-El’s line “I give to them my only son,” then you will really won’t believe the hit-you-over-the-head obviousness of Clark’s Garden of Gethsemane moment here.

Distressingly, the usually much more restrained and subtle Shannon spends much of the early portion of the film chewing any and all scenery that crosses his path. Also, Zod’s motivations for what is driving him through the film aren’t revealed until close to the end. This just makes him feel like a two-dimensional villain and deprives the character of any empathy that the audience could feel for him.

*Note: Spoilers for the finale of the film from here*

However, right at the end of the film comes two big failures on the movie’s part that sours the whole experience. In their final confrontation, Zod points out that Superman’s weakness is that he cares for humans. But we have just spent the last hour watching Superman tossing Kryptonian villains through buildings, homes, grain elevators, gas stations, trains and whatever else gets in the way, causing untold damage in both Smallville and Metropolis. And the film makes no attempt to show that the locales have been totally evacuated. If anything, we do occasionally see bystanders running for their lives and as the movie mines 9/11 imagery during its finale, the implication is that there are still people inside those crumbling edifices. But at no time do we see Superman attempting to either contain or relocate these conflicts to where people won’t be in as much danger. Sure there are a few moments when he does save a falling person from splatting on the sidewalk, but this is him being reactive, never being proactive.

But even this pales in comparison to the out of character action he takes to finally end the threat of Zod. As Zod taunts Superman for caring for what he sees as the clearly inferior humans, the movie violates one of the clearly inviolate rules for the character and has him snap Zod’s neck. But Superman does not kill. It has been one of the standard rules for the character for decades and is one of its core ideas. And yes, I am well aware of the storyline from 1988 where Superman executed an alternate reality version of Zod after he had killed the entire population of a parallel Earth, but that was a story to examine why Superman has that self-imposed restriction, the exception to explore why he has the rule.

We are told that the symbol on his chest is the Krytonian symbol for “hope” and that he would raise humanity to greater heights. But for Superman to kill, shows the character at a more base level, not as the exemplar he is meant to be. Is this Snyder defines as heroic? Has the idea of striving to be better people become so passe that even one of our culture’s most known proponents of that ideal is no longer allowed to truly espouse it? While Man Of Steel is thrilling, ultimately it may be, to paraphrase a line from one of producer Christoper Nolan’s own films, not the Superman film we need but the Superman film we deserve.

About Rich Drees 6666 Articles
A film fan since he first saw that Rebel Blockade Runner fleeing the massive Imperial Star Destroyer at the tender age of 8 and a veteran freelance journalist with twenty years experience writing about film and pop culture.

Here’s the difference between the Marvel and DC film empires. The Marvel film efforts are such a well oiled machine that nothing short of a fistfight on set will get mention in the trades. However, [click for more]

The studio is hedging its bets on further comic book movies until they see how Zack Snyder’s Superman film performs. [click for more]

About 15 minutes into Jonah Hex, I started thinking about Josh Brolin’s teeth. I was thinking–were they accurate? There had to be dental hygiene back in the old west–tooth powders and whatnot, but Jonah’s mouth [click for more]