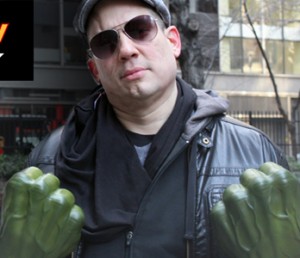 Latino Review is a personality driven site and there are no bigger personalities working for them than El Mayimbe. He has developed a fan base that admire the swagger he exhibits as he delivers scoop after scoop (and they stay with him after those scoops are proven wrong). So it’s not surprising that El Mayimbe would announce his successful battle with adrenal cancer to the readers of the site. And the post is a heartfelt,if poignant tale of his feeling and emotions while battling the disease–right up until the end when he shoehorns a tacky plea for his Indiegogo campaign:

I am doing everything possible and utilizing everything available in both modern and alternative medicine to keep ACC from returning. Am I scared to death? Absolutely. But John Wayne said it best, “Courage is being scared to death, but saddling up anyway.” These last few months have been the most challenging of my life. As a part of the campaign, regardless of what we raise, I’m going to be making a donation to Stand Up To Cancer (SU2C). SU2C is a groundbreaking initiative created to accelerate innovative cancer research that will get new therapies to patients quickly and save lives now. SU2C is bringing together the best and the brightest researchers and encouraging collaboration instead of competition among the entire cancer community.

Speaking of Spartans, fifty five so far have joined our indiegogo campaign. We can certainly use more. I hear the whispers about the campaign, read the comments that trolls have left, and read the anonymous emails that spineless cowards have sent me. Sorry haters, I’m not the quitting type. I’m not the type to throw in the towel after the first or second quarter. In fact, the negativity only fuels my motivation and strengthens my resolve.

No retreat, no surrender. That is Spartan law.

And by Spartan law, we will stand and fight.

It’s now halftime with a lot of the game still left to play and a lot of fight left in me. I have quite a mountain to climb and the determination to see it through no matter what. So thank you for taking the time to read my story, and at the very least I hope you consider eliminating aspartame from your lives. If you wish to join our campaign, please click on the widget below because we can certainly use more Spartan warriors. Thanks again everyone.

Now, let me say that I hold nothing against El Mayimbe personally, despite what I write about him. I never met the man, and I probably wouldn’t know him if ran into him, and, on a human level, I honestly hope and pray that his cancer does not come back and he has a long and healthy life.

However, I, like surely many of you reading this out there, have had cancer touch their lives. Not personally, thank the fates, but to people I love. My mom had a malignant tumor removed from her arm that luckily was caught in time and didn’t cause any more problems. And my wife had a serious bout with cancer while in college which she fought hard against and eventually came out victorious. What these women had in common, besides being two women I love with all my heart and soul, is that they never used their status as cancer survivors to ask for personal favors. I mean, in a sense the didn’t have to. Mom had my dad to help her out with whatever she needed and my wife was graced with an understanding school who allowed her to stay enrolled while she was going through chemo and an awesome roommate who signed her up for classes and brought her food when she was too weak to do so herself.

But neither of them said “give me money because I have cancer,” which is what it seems like El Mayimbe is essentially saying, and using his “news” site to do so. The last two paragraphs are essentially him asking his readers to support his film making venture, going so far as to equate it with his fight with cancer, yet not coming right out and saying it. This offends me to no end.

I mean, this isn’t the first time we’ve talked about his shilling his film projects on his site and how much of a gross violation of journalistic ethics it is. But those last paragraphs essentially turn the post into one big guilt trip to coerce his fans into supporting his film project, which causes me to examine everything about the timing of the announcement.

In the post, El Mayimbe said he had the tumor removed on May 14th and had his follow up visit was on May 29th. That means he had a month to make this announcement. Considering the sales pitch in his last paragraph, is it really a coincidence that he decided to post the admission now, when his Indiegogo is at the half way point and has only earned under $6,000 of the $109,000 requested total? You have to go through extreme measures when you have to average $7360.58 per day to make your goal in the allotted time. And considering that he has only garnered a whopping $175 since the post, there will be even more shilling and hucksterism in the future. I await with an enormous sense of dread what else he is going to do to play on our emotions next.

It’s great that El Mayimbe wants to make a movie. And, don’t be misled by him, he’s not making the film to help support Latino Review. If he wanted to bring money into the site, he could increase the number of ads on the site, add a “Donate” button to every page, start a charity auction with those Guillermo Del Toro signed items.  Those all would increase the operating revenue. No, he’s earning money for the movie because he wants to make a movie. He just doesn’t want to help pay for it himself, and he has no other way to get backing. So he uses his news site as free advertising for the fundraiser, violating just about every journalistic ethic there is. When that tactic looks like it will fail to get the money he needs, he plays onto his readers sympathies to try and bump up donations. Distasteful.

What El Mayimbe should have done was advise his readers to follow in his footsteps and donate to a cancer charity. But he was more concerned with selfishly getting his movie made than fight to make sure no one else had to go through what he went through. Well, I’ll go ahead and do that for him. If you were considering, even for one second, about supporting El Mayimbe’s Indiegogo project, don’t. Instead, donate that money to one of these charities, graded A or above by the CharityWatch of the American Institute of Philanthropy.

Because, always remember, saving a life will always trump getting a movie made.

The actress is in negotiations to lead the cast of the haunted house thriller. [click for more]

JUSTICE LEAGUE May Only Have Five Heroes In Its Cast

A remake, a tale of revenge, and an idiot brother hit theaters this week. [click for more]