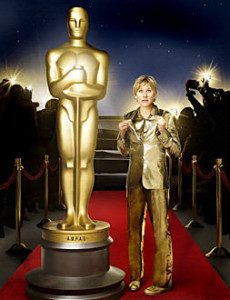 The Academy of Motion Picture Arts and Sciences tried to woo in younger viewers to its telecast this year by choosing the edgy Seth MacFarlane to host the ceremony and it worked. But MacFarlane bowed out of a repeat performance next year, and instead the Academy went with a safer choice.

It was announced today that comedian and talk show host Ellen Degeneres will return to host next year’s Oscar telecast. It will be her second time hosting, the first coming in 2007’s telecast.

Degeneres’ performance during that show was received with mixed reviews, although, in all fairness to her, she was saddled with on of the longest telecasts in Oscar history (four hours!), which would have made many a critic cranky. The main criticism of her hosting was that it was too-low key and not at all biting, which I am not sure the Academy would consider to be negative criticism.

The TED director adds another name to the cast of his western comedy. [click for more]

Will the Screen Actors Guild nominations give us a glimpse of how the Oscar ceremony will look like? [click for more]

If you haven’t seen any of the five movies nominated for Best Picture at the Academy Awards but have no plans for February 23 and have 30 bucks burning a hole in your pocket, AMC [click for more]