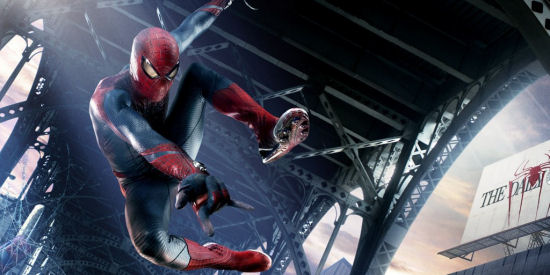 Two stories are breaking that relate to Sony’s Amazing Spider-Man franchise and both seem to hint at the future of the popular superhero films.

First came the announcement that Amazing Spider-Man 2 writers Alex Kurtzmn, Roberto Orci, and Jeff Pinkner have brought back by the studio for the third film. The trio replaced credited writers James Vanderbilt, Alvin Sargent and Steve Kloves from the first film. With director Marc Webb undoubtedly set to return for the third film, it looks as if everyone is trying to maintain a certain creative continuity across the sequels, especially given Webb’s statements that he has a long-term story arc he wants to tell across the two sequels.

Another element of that multi-film story arc may be the news that actor Paul Giamatti has stated to Collider that he is already set to return to for the third Amazing Spider-Man film to reprise his character of Aleksei Sytsevich, aka The Rhino, whom we will meet when Amazing Spider-Man 2 hits theaters next summer. And although the actor has signed a multi-film contract with the studio for the franchise, he is not sure yet if they’ll be needing his services for Spider-Man 4.

Taken together, I see this as more evidence that Webb and Sony are building up to an appearance by the Spider-Man supervillain team known as the Sinister Six.

Previously, in a change from a number of superhero films, Rhys Ifans’s The Lizard survived his appearance in The Amazing Spider-Man, ending up in jail rather than in a casket. We also know that in the upcoming second film, in addition to Giamatti appearing as the Rhino, the main villain will be Jamie Foxx as Electro. Additionally, we know that Chris Cooper and Colm Feore have been cast as Norman Osborne and Adrian Toomes. Comics fans know them as the villains the Green Goblin and the Vulture, though it is uncertain if they will be appearing in the film under those aliases.

So with the franchise having at least five well-known Spider-Man villains in play, I think the evidence clearly shows that Webb’s game plan is to feature the Sinister Six at some point in the future. Foxx has previously said that this was something being contemplated, and it is looking as if they are actively setting the pieces on the board to make it a reality.

The question remains, will it be in Amazing Spider-Man 3 in 2016 or Amazing Spider-Man 4 in its already announced 2018 release? I think it might be too early to tell, though since Sony has announced dates for a fourth movie, I’m thinking that the Sinister Six might make their debut as a team there. If anything, it would make a nice change from the usual trilogy mindset.

Admittedly, I was not the biggest fan of the first Amazing Spider-Man film as were others. (You can read my and FBOL Comic Book Film Editor William Gatevackes’ reviews here and here.) But I do like the fact that it appears as if Sony is doing some real franchise management and is planning out the direction of their next several Amazing Spider-Man films at once. The goal, I suppose, is to have the franchise feel as if it is growing more organically, rather than just being episodic installments of Spider-man‘s adventures. And for that I am excited to see how things play out.

STATE OF THE COMIC BOOK FILM: A Juggernaut In Motion

Even with a number of disappointments and outright bombs, the popularity of the comic book film shows no sign of waning. [click for more]

Jamie Foxx On AMAZING SPIDER-MAN’s Villains: “Yes, They Actually Talked About It, The Sinister Six”

Now that the cat’s out of the bag, who will be the six? [click for more]

Singer follows up his take on a classic X-Men comic book story by maybe giving us another one. [click for more]

A Look AT The Future Of The AMAZING SPIDER-MAN Franchise http://t.co/Kh4eVs5MSS