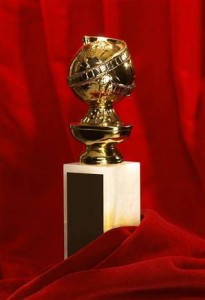 If the Golden Globes are truly the early indicator for Oscar glory, then we have a two horse race for Best Picture.

The 71st Golden Globes were given out in Los Angeles Sunday night. American Hustle led in the statute counts in the film category with three awards, including the award Best Motion Picture, Musical or Comedy. Dallas Buyers Club was second with two awards.

American Hustle’s win immediately gives it boost in the Oscar race, but odds-on Oscar favorite 12 Years a Slave also won an award, for Best Motion Picture, Drama. It will be interesting to see if the former overtakes the latter by Oscar night.

If we were looking for surprises, we’d find them in the male actor awards. Matthew McConaughey defeated the highly favored Chiwetel Ejiofor for Best Actor in a Motion Picture, Drama and Leonardo DiCaprio overcame both Bruce Dern and Christian Bale in the Best Actor in a Motion Picture, Musical or Comedy. If you were to look at this in terms of Academy Award chances, McConaughey’s chances of taking home an Oscar have just become very, very good and DiCaprio’s chances of possibly being nominated might have just registered a slight uptick. Maybe.

Here is a complete list of nominees and winners:

1. Ice Age: Dawn of the Dinosaurs (FOX, 3,993 Theaters, 94 Minutes, Rated PG): Ah, two movies on Wednesday, none on Friday. Getting a jump on the Fourth of July. Means after I post this, [click for more]

Joaquin Phoenix In Talks For Todd Phillips’ THE JOKER Film

Todd Phillips wants the WALK THE LINE actor for the lead in THE JOKER, and apparently the feeling is mutual. [click for more]

1. Underworld: Rise of the Lycans (Sony/ Screen Gems, 2,942 Theaters, 93 Minutes, Rated R): It’s not often that you have an actor with two films hitting wide release in the same day. It’s even [click for more]