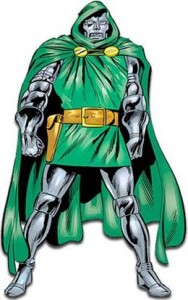 The trainwreck that the Fantastic Four reboot is quickly becoming has thrown a couple more rocks on the tracks.

The Hollywood Reporter’s Heat Vision blog has reported that screen tests have begun on the reboot with familiar names (Miles Teller, Kate Mara) and new names (Emmy Rossum, Christian Cook) in the mix. But there is one tidbit added to the article that is sure to get fans upset.

The article states that Fox is testing big names for the reboot’s villain, Doctor Doom, and they aren’t ruling out casting a woman in the role.

Yes, Marvel’s most famous bad guy might just be a bad girl for the reboot.

So we will have an African-American Johnny Storm in Michael B. Jordan, and female Doctor Doom. Yeesh.

Now, in a way, this is brilliant on Fox’s part. “What, you don’t like a black Johnny Storm? What are you, racist?” “What, you have a problem with woman being Dr. Doom? What are you, sexist?” All while wrapping the complaints up as another round of the typical fanboy griping, which is easily dismissed.

But when you add this to a plot that makes major changes to the origin and takes away a lot of the elements that made the Fantastic Four great, you are quickly approaching a Fantastic Four film that is one in name only. And that is a valid reason for fans to get upset.

But a lot of this is based on rumor and innuendo. Maybe there is nothing to worry about. We shall see.

“…the plot won’t be based on any history of anything already published.” You can officially hate this film now. [click for more]

Oh yeah, and our first official look at Doctor Doom. [click for more]

It’s not like Hugo Weaving needs any more geek cred. His role in the Lord of the Rings trilogy secured that. If that wasn’t enough, his performance in the Matrix trilogy cast it in iron. [click for more]

FANTASTIC FOUR Reboot: Could Doctor Doom Be A Woman? http://t.co/VsXBGhf6e8

Why is this so roundly rejected? I think it could be cool.

I’m just sick of everything outside of Avengers being fucked.

Why is it fucked to have a female villain? I don’t get it.

I love the idea of female villains. Ok, it kind of reminds me of how they changed Galactic.. You know what I mean. I can’t speak for everyone else but I have those same feelings.

Yeah, but they changed Galactus into a cloud. I could understand fans of the comics being upset with that. Personally, I thought they had the right idea, but it looked stupid, and their use of it was stupid. I think it’s more about casting and script than whether or not Doom is female. It’s the only thing that has excited me about this, another comic book film. I wish more of these Marvel films would actually take chances with the material and use it for an original cinematic expression rather than a strict redistributing of the same ideas. /rant

For me, it’s two things. One I mentioned in the article–it is another step away from the source material, and one I think takes it to the territory of being something that is completely different. Why don’t they just use this as an original film and leave the FF alone. And two, the Reed/Doom dynamic has always been to me a battle of machismo using intellect instead of brawn. That doesn’t work if one of them is a woman.

Pretty much right on Bill. At what point, if any, can Marvels lawyers step in and say “Thats not FF and we’d like our rights back”?

Ugh, why, oh why, do they keep fucking this character up? He’s Darth Vader, folks, he’s pretty much Darth Vader as a mad scientist. Why can’t you Hollywood schmucks get that?

Dammit, at this point, I think I should get a Doom costume, have someone videotape me doing the handclench and shouting “Richards!” and I should play Doom.

Of course , I’d want a scene where Sue has been baking for Ben and Johnny and Doom shows up at the Baxter building for a civil (for Doom at least) visit…. Sue: “Fat-free muffin, Victor?” Doom: “you certainly are, Susan!” (yeah, I know, I know, I stole that from “Married With Children”, but comeon,it’s hilarious!)

They should just get some big dude, throw a Doom suit on him, and have him act out the part, but Peter Wyndgarde should be the voice of Doom.